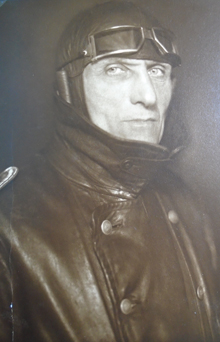 AN EXCEPTIONAL AND VERY LARGE GERMAN WW1 AVIATION DOCUMENT, ARTEFACT AND ALBUM GROUP TO JEWISH FIGHTER PILOT JACOB WOLFF, ONE OF THE MOST REMARKABLE PILOTS OF WW1 WHO FLEW WITH KEK METZ AND JASTA 17. WITH OUT DOUBT ONE OF THE FINEST AND MOST COMPLETE GERMAN WW1 FIGHTER PILOTS GROUPS TO COME ON THE MARKET IN RECENT YEARS

Not only is the group amazing, the pilot himself was quite remarkable. A rich Jewish business man (Cigar manufacturer) who at 46 in 1914 was exempt from the Army, yet fought prejudice and his age to become the oldest German fighter pilot off WW1 and possibly of all nations. Originally flying 2 seaters, he few Fokker EIII’s in Kek Metz with the likes of Hermann Goering and other later Aces. As an original member of Jasta 17 when it was formed, he was promoted Leutenant from reserve NCO rank; this being something almost unheard of in the German Army. He was severely wounded in a dog fight in mid 1917 and did not return to active service due to wounds. At this point he had 4 confirmed victories and 4 unconfirmed, though at least 2 of the latter were so clear cut, he was most unfortunate not to have them confirmed.

In the early 1920's, Wolff formed an intimate club of around 15 wartime friends called the 'Iron Pilots'. These friends were some of the greatest living Aces, the likes of Baumer, Jacobs, Lothar and Bolko Von Richthofen, Lorezer, Bulow-Bothkamp, Bongartz, Muller, Bolle, Von Boeningk, Schlottmann, Von Haeseler, Schlz-Dornburg etc. Meetings seem to have been held in Wolff’s and Bulow- Bothkamp’s extensive properties in the early 20’s and within the documents and album group are multiple letters and photographs relating to these meetings.

On the document side there is everything bar his logbook; documents for every promotion, award, victory confirmations, Soldbuch’s, Honour goblet, letters from Kek Metz and Jasta 17, post war condolence letters from other aces such as Udet and a great number of other Aces signatures throughout the group etc etc.

2) SUPERB 900 SILVER STAMPED CIGARETTE CASE GIVEN TO WOLFF BY CAPTAIN VON SEEL, COMMANDER OF JASTA 17 RELATING TO ONE OF HIS VICTORIES WITH JASTA 17. INSIDE AN ENGRAVED DEDICATION FROM VON SEEL, DATED JUNE 1917

This is a superb piece, an original photo of which in one of Wolff’s photo albums. Still has several cigarettes in it!

This with Wolff’s monogram to top.

Most of Wolff’s Award documents are listed below but there is a huge number of other documents and letters related to Wolff’s service and a great many documents from Kek Metz and especially Jasta 17. All together there are approximately 250 documents, letters or other items of paperwork!

Also a very number of other documents and letters also, a quite incredible collection.

5) LARGE PORTRAIT PHOTO, size 22.5 X 16 CM, AS A LIEUTENANT PILOT WEARING THE HOUSE ORDER. THIS HE WEARS ERRONEOUSLY AS A NECK BADGE

These are duplicate text pages from Wolff’s specially commissioned photo albums. Wolff used his logbook, unit war diaries etc to tell of his and his units story. Everything was professionally typed up with room for photos and documents (these albums can be seen in a separate listing) and a large number of these pages without photographs added were kept.

Album contains a large number of original photographs of Wolff along with copies of some of the documents, pictures etc. Basically the family look to have put this album together as a snapshot of Wolff’s military service and post war life, using unused and spare original photos.

Of the original photos in the album, of particular note are some large original portrait photos of Wolff in uniform and flying kit, a large photo of Wolff and Jasta 17 Ace Julius Buckler and a small number of wartime shots throughout.

Wolf remained close friends with a large number of Aces post War, in particular Harry Von Bulow Bothkamp and Paul Baumer. There are a large number of photos from 1924 showing Wolff and Baumer with aircraft from Baumer’s civil aircraft company (and another in event in 1925), a signed letter from Von Bulow Bothkamp talking of one of the ‘Iron pilot’s’ events in 1924 with photos from this meeting, more from a visit to Von Bulow Bothkamp’s home in 1925. Also photographs and documents relating to a National Balloon event in 1925, a series of photos taken at flying event in 1923 (various personalities), dinner parties with various Aces, the wedding of Von Bulow Bothkamp and post war photos of these Aces, also Udet, Bruno Loerzer. There are numerous photos of Wolff’s wife, his home, friends and family. Non original photos include shots of aircraft and Wolff’s uniform/awards in the German Air Force Museum. There are also numerous copies of documents from his award group.

Together with the album, there is an an additional folder full of documents on Jacob Wolff Many of the documents in the Jakob Wolff file are copies of the original documents, articles on Wolff but there are lots of other documents not include in the original document group, copy photos, post War letters, postcards etc etc. Another large folder is included, the content being Eberhart Wolff, his son, who was "allowed" to serve the Luftwaffe as a so called "Halbjude". Many Nazi documents and letters in this group.

I must stress that although the above lists of most of the items in the group, it does not list everything, their will be items I’ve missed out or not even noted myself! Likewise, the pictures of the PDF are of only part of the group, to give a taste of the content. His photoalbums are listed separately on the website and I have photos of the complete group of documents etc that can be forwarded to anyone wishing to see the full content (around 3-400 images!) An article on Wolff can also be forwarded to any potential buyer to give you a better idea of who we are dealing with. Split into smaller lots, the value of the content would far exceed the asking price, however it would be a great shame to do this and I will keep all as a single large group.