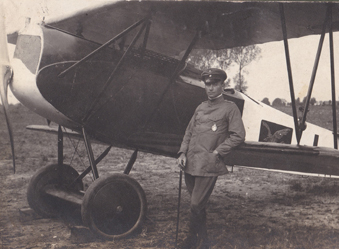 AN OUTSTANDING AND RARE WW1 GERMAN FIGHTER PILOTS PHOTOGRAPH ALBUM BELONGING TO LEUTNANT JOSEF KELLER OF JASTA 43 WHO ORIGINALLY SAW SERVICE IN THE INFANTRY BEFORE BECOMING A PILOT SERVING WITH JASTA 43 FROM MAY 1918 SHOOTING DOWN AN SE5A IN AUGUST, HE WAS INJURED IN A CRASH OF HIS FOKKER DVII IN OCTOBER 1918. MENTIONED MULTIPLE TIMES IN LEUTNANT JOSEF RAESCH’S DIARY, POST WAR FOUGHT WITH FREIKORPS SELBSTSCHUTZ OBERSCHLESIEN DURING THE SILESIAN UPRISING OF 1921

Leutnant der Reserve Josef Keller originally served as a Private in Infanterie-Regiment Kaiser Wilhelm (2. Grossherzoglich Hessisches) Nr. 116. A group photo, which includes Keller, of men from this regiment, all wearing picklehaulbes suggest it was taken circa 1914. Other photos of Keller, show him as an NCO, waering Ribbon’s for the Iron Cross 2nd Class and a State gallantry award ribbon. Another taken of him in hospital, suggests he was wounded at least once during his army service.

By the time he joined the air service, it seems Keller had been promoted Leutnant der Reserve as no aviation service pictures show him with NCO insignia. The date of him actually taking flight training is unknown but its probably early 1918. After qualifying as a pilot, he joined Flieger-Abteilung 236(a). He may only have served with this unit a short time because there are very few photos from this unit in the album. The two photos of him next to his Hannover CL date from April 1918 plus, this is apparent due to the 1st type Balkenkreuz on his aircraft, this only being authorised in late March 1918.

Most books have Keller joining Jagdstaffel 43 (Jasta 43) on 5 June 1918 but he may have joined a little earlier. In his diary, Leutnant der Reserve Josef Raesch, tells how he joined Jasta 43 on 6 June 1918 and Keller was one of the pilots who greeted him on arrival. A photo in the album is of the funeral of Ofsv Julius Trosky ………………….

This is an outstanding album, not only due to the rarity of some of the photos and subject matter but because so often it is impossible to work out who the owner of the album was. Here not only do we know the owner of the album but all his military service appears to be pictured, especially the most interesting part as a fighter pilot. To add to this, we have a very good idea of Keller’s combat service with Jasta 43 from Raesch’s superb diary.