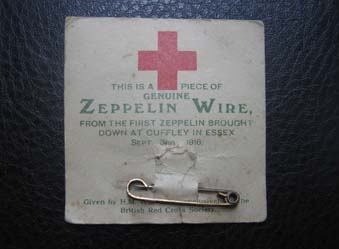 A small printed card with a red printed guarantee reading;

‘This is a piece of Zeppelin wire from the first Zeppelin brought down at Cuffley in Essex (the County incorrectly printed at the time) September 3rd 1916, given by H.M.Government to the British Red Cross Society’.

A small safety pin is attached to the card and on this would have been a small piece of wire (similar to item J2093). However this has become detached and is missing.

On the night of 2nd/3rd September 1916, a fleet of sixteen airships embarked on the biggest raid so far. Among the pilots scrambled to counter this was Lieutenant William Leefe Robinson. Flying an obsolete B.E.2c, Lieutenant Robinson encountered a Schütte-Lanz airship, the SL 11, over north London and engaged it in a David and Goliath encounter. Attacking from beneath, Robinson strafed the ship with machine-gun fire. The SL 11 burst into flames and crashed in a field behind the Plough Inn, Cuffley, killing all sixteen men on board. This was the first Zeppelin/Airship brought down by the British in WW1 and for his heroics, Leefe Robinson was Awarded the Victoria Cross.