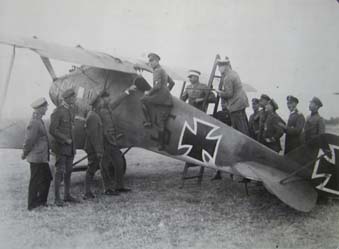 AN INCREDIBLY RARE WW1 GERMAN ALBUM AND AWARD DOCUMENT GROUP TO A PILOT IN JASTA 25 , ONE OF TWO MACEDONIA FIGHTER SQUADRONS

THE ALBUM TO VFW HERMANN PINKERT FFA 66, FFA 69 AND JASTA 25 MACEDONIA:
32 x 25 cm hardbound album, card pages, containing 194 photos, sizes varying between 16x 9 cm and 5.5 x 4cm, though not many of the latter, the majority in between these sizes.

The content of the album is superb being entirely aviation and of this almost entirely of aircrew or aircraft; no scenic unless of aviation nature or aerial views which is quite unusual. Vfw Pinkert clearly took time putting the album together with each page being put together with care so it looked visually pleasing to the eye and going round the photos/labelling them in white ink so they stand out more. Album starts with a couple of portrait photos in aviation uniform 1913/14, and goes right through his War service 1914 -18, though really only concentrating on his pilot training 1915 and onto his service in Macedonia 1916-18……

…The vast majority of Pinkert’s service appears to be on the Macedonian front. Both FFA 66 and 69 were two of five or six 2-seater units that served there and Jasta’s 25 and 38 were the only fighter units that served on that front. As such Pinkert’s album contains a multitude of very rare photos to units and personnel, uniform types etc that rarely come on to the market. Indeed, of the well into the 1000 WW1 aviation albums I’ve had through my hands, not more than a handful have been to Macedonian units and of these this is the first to a Jasta. The closest I’ve had was to a fighter pilot serving with FA 30; a 2-seater unit that had their own fighters. Though that was a pretty amazing album too!

All in all this is a superb and very rare complete group. The album is without doubt the star item, however the entire content is pretty special.