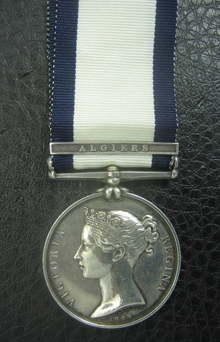 A ROYAL MARINE ARTILLERY OFFICERS NAVAL GENERAL SERVICE 1793 MEDAL, CLASP ALGIERS, AWARDED TO CAPTAIN ROBERT HENRY WHO WAS PRESENT AT THE TAKING OF ANHOLT IN 1809, NUMEROUS BOAT ACTIONS AGAINST THE DANES, SIEGE OF THE FORTRESS OF DANZIG AND ON SPECIAL SERVICE DURING THE 1812 WAR WHERE HE SERVED AS SECOND IN COMMAND TO COLONEL NICHOLLS, ROYAL MARINES. DURING 1814, HE HELPED RAISE THE MARINE COLONIAL CORPS AND RAISING A FORCE OF CREEK INDIANS, OPERATING WITH THIS FORCE TO HARASS THE ENEMY AND DRAW AWAY HIS FORCES FROM NEW ORLEANS. AS WELL AS MANY SMALLER ACTIONS, HE TOOK PART IN THE DISASTEROUS BATTLE OF FORT BOWYER AND BATTLE OF PENSACOLA 1814. LATER SERVING AT THE BATTLE OF ALGIERS IN 1816 AND IRELAND RIOTS IN THE 1830’S TO NAME BUT A FEW!

Robert Henry was appointed 2nd Lieutenant in the Royal Marines on 1st Nov 1808. On 30th December he joined HMS Standard who’s Marine detachment was commanded by the famous Captain Edward ‘Fighting’ Nicholls, a soldier Henry would get to know very well.

On 18th May 1809, 120 marines under Captain Nicolls, Lieut’s Henry and Atkinson were landed on the island of Anholt. The marines powder had become wet and unusable during the landing from boats and were therefore forced to take the Danish guns and positions by force of bayonet, this they did although heavily outnumbered and effected the capture of the Island. Henry’s record of service (which is quoted in Bold italics herein) states: ‘Landed and disposed the Danes of the Island of Anholt after a severe engagement’ Nicholls was rewarded for this by being made Governor of the island and Lieutenant Henry would stay with him at Anholt before returning to England in November 1810. Lieutenant Henry joined the Royal Marine Artillery in January 1811 and ‘attended mathematical academy 12 months for instruction in gunnery’ ……………………….

Captain Henry had an outstanding service, especially for little known but very important side of the War of 1812 and for which a large amount of research still needs to be done.

Captain Henry had an outstanding service, especially for little known but very important side of the War of 1812 and for which a large amount of research still needs to be done.