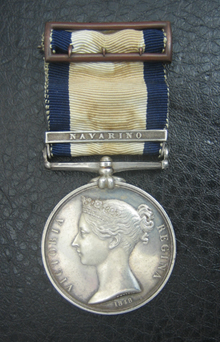 Daniel Riordan served as an Ordinary Seaman aboard the 36 gun frigate, H.M.S. Dartmouth at the battle of Navarino.

H.M.S. DARTMOUTH AT THE BATTLE OF NAVARINO

“Commissioned by Capt. Thomas Fellowes on 21 Feburary 1827, to join Vice Ad. Sir Edward Codrington's squadron in the Mediterranean. In the summer they were joined by a division of French ships under Rear Ad. De Rigney and a Russian squadron under Rear Ad. Count Heiden, to enforce the protocol, signed in St. Petersburg in April 1826, for the protection of the inhabitants of Morea.

On 9 Sept. a Turco-Egyptian fleet under Ibrahim Pasha, closely watched by Codrington, entered the port of Navarino. On the 25th. Ibrahim agreed to suspend hostilities against the Greeks and withdraw from Navarino, and on the strength of this agreement nearly all the blockading forces were withdrawn on the following day, the British to Zante and the French to Milo. Only Dartmouth and the French L'Armide (40) were left to watch the Turks.

On 2 October Dartmouth informed Codrington that the Turks had put to sea and were standing towards Patras where Lord Cochrane was aiding the Greek patriots. Although he had only ASIA, Dartmouth, and two corvettes he persuaded the Turks, who had seven frigates, nine corvettes, two brigs and nineteen transports in one division, and six frigates and eight brigs in a second division, to put back, and the whole re-entered Navarino on 4 October. By the 15th. the blockading squadrons were back before Navarino and it was decided to enter the harbour to renew negotiations with Ibrahim, whose disembarked troops were continuing their atrocities against the Greeks. The Turko- Egyptian ships were arranged in a semicircle with the large ships and the frigates forming the inner line. Codrington issued instructions for the disposition of his fleet and Capt. Fellowes had orders to take the corvettes and brigs (Rose, Brisk, Mosquito and Philomel) under his command and prevent the five Turkish fire-vessels from injuring the combined fleet. When Lieut. George William Fitzroy and Austin Fornes, midshipman, in Dartmouth's boat requested that the fire-vessels should move further away, the Turks opened musket fire on them and killed the Lieutenant and several seaman. Dartmouth, assisted by the French La Syrene, replied with defensive musket fire which enabled the boat to regain the ship.

One of the Egyptian ships then fired a round shot into the French flagship and fire became general. Two fire-vessels were burnt, one blew up and another was destroyed by broadsides from Philomel. Dartmouth saved Sirene from attack and Rose saved Armide. In all Dartmouth lost six killed and eight wounded.”