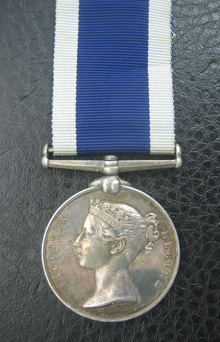 William Hallums was born at St Mary’s, Chatham, Kent, on 24 August 1843. First Served aboard H.M.S. Adventure as a Servant between January and December 1867, then as Acting Sick Berth Attendant until November 1870. As a Sick Berth Attendant, served aboard H.M.S. Barrosa, Raleigh, Duncan, Garnett and Naval Barracks a number of times among others. He was finally pensioned in January 1887 and died on 10 May 1926 at Chatham, Kent.

Condition GVF, impressed naming. Sold with copy service papers, census, marriage and copies of photographs of both Hallums and Hallums and his wife.