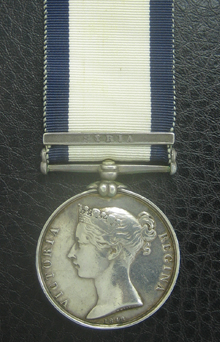 NAVAL GENERAL SERVICE 1793 CLASP SYRIA TO A WARRANT OFFICER'S MEDAL, WITH SOME VERY EARLY WEST AFRICA ANTI SLAVERY PATROL SERVICE 1818- 1824. SERVED AS A CARPENTER BETWEEN 1821 AND 1857

Salsette, Victory, San Josef, Rodney, Agincourt, Royal William and St George. As can be seen, many of these ships were 3rd to 1st Rate Ships of the Line and as Carpenter to these, Cooke must have been a highly skilled and respected Warrant Officer.

Between 1818 and 1824, Cooke served off the West Coast off Africa (mainly off Sierra Leone) on anti slaver duties on the following ships, both of which were successful with numerous captures of slavers. Also of note is his service aboard Rodney during the Syrian campaign (medal);

30 Jan 1820, detained in the Rio Pongos the Dutch slave vessel Maria, with 2 slaves on board

30 Jan 1820, detained the Spanish slave vessel Francisco, with 69 slaves on board

2 Mar 1820, detained the Spanish slave vessel Gazetta, with 81 slaves on board

22 Mar 1821 the Tartar, with the Thistle in company, detained in the River Bonny the Portuguese slave Donna Eugenia, with 83 slaves on

23 Mar 1821, detained off the River Bonny the Spanish slave vessel Anna Maria, with 491 slaves on board

9 Apr 1821 detained in the River of the Old Calabar the Portuguese slaver Gaviao,

Jul 1821 has, with the Snapper, examined 16 vessels which were considered to be capable of carrying slaves: 12 Portuguese ; 3 French ; and one Spanish.

25 Jul 1821 the Pheasant, with the Myrmidon in company, detained the Portuguese slave vessel Adelaide, with 232 slaves on board

Sierra Leone Sep 1821 brought in the Portuguese schooner Adelaide, with about 200 slaves on board

Operations on the Syrian coast in 1840 including the bombardment of St Jean d'Acre in November.

During his service as Carpenter, Cooke saw the position of Carpenter becoming a Warrant Officer Rating (junior Commissioned Officer). Carpenters, along with Boatswains and Gunners, were Standing Officers who remained with a vessel, and continued to be paid, during a ships period it was not in Commission. As such they were highly coveted positions as rest of the officers and crew would usually be discharged and lose their income if they could not find another ship to join.

Condition NVF. Medal known in the 19th Century with incorrect clasp and has at some point been reconstituted. A heavy edge knock at 6 o’clock effecting ‘COO’ of surname which looks like its been partially reengraved over a plug. Far from a perfect medal but a very good and extremely long service for this Officer.