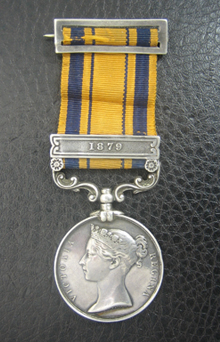 SOUTH AFRICA 1877-9 TO A SEAMAN OF H.M.S. SHAH WHO IS LISTED AS ONE OF THE 38 OFFICERS AND MEN WHO VOLUNTEERED PARTICIPATED IN THE ATTACK ON THE PERUVIAN IRONCLAD HUASCAR IN THE ATTEMPT TO DESTROY THE HUASCAR ON 31ST MAY 1877. LATER TAKING PART IN THE ZULU WAR HE WOULD HAVE TAKEN PART IN THE RELIEF ESHOWE AND THE BATTLE OF GINGINDHLOVO

The naval Incident of Pacocha took place on 29 May 1877 when Nicolas de Pierola was leading a revolution to overthrow then Peruvian President Piérola's supporters used the Peruvian monitor Huascar as a raiding ship. She harassed the shipping especially off El Callao, the main commercial port of Peru. However, after she boarded some British merchant ships, British authorities sent Rear Admiral de Horsey to capture the vessel. The Peruvian warship managed to outrun the British squadron after a fierce exchange of fire. Huascar guns were undermanned, and the monitor fired just 40 rounds. Shah's mast was damaged by splinters. On the British side, Shah fired 237 shots and Amethyst 190, but none of them carried armour-piercing ammunition. Huascar was hit 60 times, but her armour shield defeated all the rounds. There was a last-ditch effort to stop or sink the rebels when two small torpedo rams from Shah attempted to find the Huascar, but the Peruvian ship managed to escape under the cover of darkness. The rebel crew was forced to surrender their ship to the Peruvian government just two days later.

Able Seaman James was one of the 38 Officers and men who volunteered to take part in the operation, 28 of who subsequently received the South Africa 1877-9 medal. James is listed as one of the men who manned the steam torpedo pinnacle, commanded by Lieutenant Lindsay, commander of the expedition.

Douglas-Morris takes up the story of the Torpedo expedition:

'Lieutenant Lindsay received a more detailed memorandum from his Captain. He was to proceed to the harbour of Iquique as close to land as possible but outside the surf, and on entry find out the position of the Huascar from one of the English merchant ships there. The whaler was to take in tow the Whitehead torpedo and attempt to approach the target from inshore of her. Lieutenant Lindsay was 'most positively' ordered not to project the Whitehead torpedo 'unless certain that it would hit the Huascar direct … at no more than 80 yards distance, with the torpedo set to run not more than 200 yards and then to sink.' These strictures were to ensure that there would not be a disastrous calamity from the Whitehead striking any other vessel.

The pinnace and cutter were to remain hidden in readiness on the seaward side. Only if firing had commenced or upon failure of the inshore torpedo party was the pinnace to attack, 'endeavouring to blow up with her outrigged 100-pound spar charge, taking care that the torpedo is in contact with the ship and, if possible, that engines are working astern at the time.' This mode of attack on an anchored vessel had on occasion been successful during the American Civil War, and in Russian hands against the Turks. The steam pinnace crew would have been well aware that, for success, their attacking craft would need to have physical contact with the Huascar, with the resultant explosion most probably causing the vessel to be swamped. Their Gatling armed cutter as escort was also there to save them!

The boats' crews were to be dressed in white working rig with blue clothing taken with them in the boats. All were to be provided with lifebelts, armed with revolvers, rifles and sword bayonets and silence strictly enjoined. At 5 p.m. on 31 May at some 20 miles off Iquique the Shah stopped and prepared for the torpedo expedition - which set off after dark when within seven miles of the port. Later, the Amethyst came up to Shah making the signal 'Huascar has surrendered today to the Peruvian Fleet,' and fortunately the recall of the expedition by rockets and blue lights was seen by the party when they were within one mile of the target.'

HMS Shah whilst returning from the Pacific in 1879 called in at St. Helena. It was here that her crew learnt of the defeat at Isandhlwana and taking on board troops from the garrison (one company of the 88th foot the Connaught Rangers and a field artillery battalion) provided by the island's Governor, she sailed for the Cape Colony Arriving on 7th March 1879, she disembarked 16 officers and 378 men of her crew at Durban, led by Commander John Brackenbury to join the newly formed Naval Brigade.

On 18th March 1879, the force heading to relieve Eshowe was joined by 10 officers and 218 seamen from HMS Boadicea, led by Commander Francis Romilly They fought at the Battle of Gingindhlovo on 2nd April where the Royal Navy and their guns held the corners of the British square. During the second invasion , men from Shah served with that part of the naval brigade that accompanied General Crealock’s column to Port Durnford.

Condition VF, with original ribbon and brooch bar. A rarely seen medal to one of Shah’s torpedo expedition volunteers.