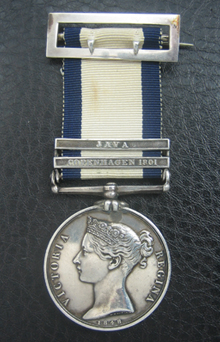 A FINE OFFICER’S 2 CLASP NGS 1793 AWARDED TO CAPTAIN’S CLERK ABOARD HMS EDGAR DURING NELSON’S HARD FOUGHT VICTORY AT THE BATTLE OF COPENHAGEN 1801. EDGAR WAS THE FIRST SHIP IN NELSON’S LINE AND THE FIRST INTO BATTLE, CONSEQUENTLY SUFFERING THE SECOND HIGHEST NUMBER OF CASUALTIES. AT THE UNUSUALLY YOUNG AGE OF 19, HE WAS COMMISSIONED PURSER BY WARRANT IN 1802 AND AMONG OTHERS, SERVED WITH LEDA AND ILLUSTRIOUS DURING THE JAVA CAMPAIGN OF 1811, HE WAS STILL ON THE ACTIVE LIST IN 1844 AND AS A PAYMASTER DIED AGED 73 IN 1856

Robert Brown served as Captain’s Clerk aboard HMS Edgar During Admiral Nelson’s at the battle of Copenhagen, in April 1801. At this battle, Edgar was the first ship in line and the first into battle. As such the crew sustained a very large number of casualties, 131 in all killed and wounded. Only Monarch sustained more, with all but one other ship suffering under 80 (the majority well under this number). As Captain’s Clerk, during the battle, Brown would have been located near the Captain on the quarterdeck, his job being to take notes as directed by his Captain. Nelson considered the Battle of Copenhagen to be his hardest fought fleet action. Although hampered by many of their ships being unprepared for service, the Danes fought fiercely and, at times, with desperation in defence of their capital city, relays of army and civilian reinforcements replacing the losses in the batteries.

Promoted Purser in September 1801 Brown is noted serving on Imogene in 1802, though for how long is yet unknown. Steel’s Navy Lists for the period 1802-1808 would need to be checked to see his service during these dates. Later Navy lists confirm service with the frigate Leda from 1808 and Illustrious from 1813. However in the NGS roll for Java in 1811, Brown claims from Illustrious, so possibly he was lent to Illustrious as both ships were operating off Java in 1811. Musters for Leda have been checked a Brown is shown as Purser of this ship between 12 April 1808 and 17 December 1813.

Robert Brown joined the Royal navy circa 1798 and died with the rank of Paymaster at Brompton Square, London, on 5 June 1856. Aged 73 when he died, Brown must have been 15 or 16 years old when he joined the Royal Navy and just 18 or 19 when he became a Purser. This was a very young age for such a position; the average age for becoming a Purser being 24. Ref; Survey of Pursers (ADM 6/193/116) which notes Brown had 36 years service In the Royal Navy by July 1834 and Obituary. The 1844 Navy List lists Brown as still on the active list, working as a Clerk in the Officer of Woods and Forest.

One of the ships Wardroom Warrant Officers, Pursers, along with Masters, Surgeons and Chaplains messed in the Wardroom with the Commissioned Officers. In 1814, Pursers were granted the same rank as Surgeons. Though often thought as a soft rating, the rank of Purser was anything but that. Like all members of a ships crew of the time, you are just as likely to see a Purser on cutting out actions (or similar) as each member of the crew, regardless of rank would be expected take part in such actions. During ship to ship actions Pursers were frequently called on to take charge of sections of guns. This is borne out in the number of Pursers found on casualty lists or mentioned for gallantry in the pages of the Naval Chronicle of the period. The same can be said Surgeon’s, Clerk’s, Carpenters etc etc

A fine Officers Naval General Service medal, which a great deal more research to be done to establish his full service.