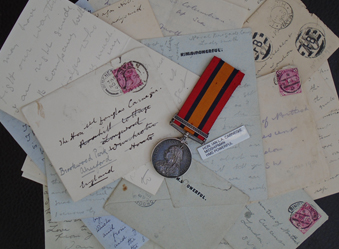 AN OUTSTANDING AND RARE ROYAL NAVY OFFICERS QUEEN’S SOUTH AFRICA 1899 AND LETTER GROUP AWARDED TO A MIDSHIPMAN OF H.M.S. POWERFUL WHO DISTINGUISHED HIMSELF AND WAS WOUNDED DURING THE SIEGE OF LADYSMITH. COMMANDING THE 12-PR. GUN ‘LADY HELEN’ AT CAESAR'S CAMP, INCLUDING DURING THE GREAT BOER ATTACK ON THAT PLACE ON 6 JANUARY 1900, FOR HIS SERVICES, HE WAS TWICE MENTIONED IN DESPATCHES AND ALSO IN CAPTAIN LAMBTON’S REPORT ON THE 6 JANUARY ATTACK

“Mr. Carnegie has had charge of a 12-pr. Gun at Caesar's Camp since 27th November, 1899, which he has fought successfully under, at times, a hot fire.”

“Lieutenant the Hon. Ian Ludovic Andrew Carnegie, who died on January 4, was the youngest son of the late and brother of the present Earl of Northesk. He joined the Riyal Navy in May, 1897 and while serving as a Midshipman of the Powerful was landed with the Naval Brigade which took part on the successful defence of Ladysmith. The Captain of the Powerful, in his report, says:- “Mr. Carnegie has had charge of a 12-pr. Gun at Caesar's Camp since 27th November, 1899, which he has fought successfully under, at times, a hot fire.” He was wounded during the siege and was mentioned in Sir George White’s despatch of December 2,1899. He passed for Sub-Lieutenant in January, 1901 and was specially promoted to Lieutenant for his services at Ladysmith, July 15, 1902. He joined the Duke of Edinburgh, in the First Cruiser Squadron in August 1907 and was attached to that vessel at the time of his death. The funeral service will take place at Weymouth to-day at 2.30pm.”…………….

SEE PDF FOR EXTENSIVE WRITE UP AND PICTURES

Seven original and important handwritten letters written by Midshipman The Honourable Ian Ludovic Andrew Carnegie ‘On Active Service’ during the Boer War. Five in original South Africa sent and stamped envelopes, the first two stamped H.M.S. Powerful as are the letters/pages. Letters were sent to various people; one to his brother, four to his mother The Dowager Countess of Northesk, etc. All of the letters concern his experiences during the Ladysmith operations, and are all contained in an old envelope with outer ink inscription, ‘Ian’s letters from South Africa 1899 & 1900’. Ten sheets of paper in all, the majority written on both sides of each page as folded and the same to reverse (effectively near forty pages of text). Also sold with a file of research with copy service, with LG, obituaries and other research on CD

NOTE: Listed separately in the Militaria section of this website is the photograph album belonging to Lieutenant Heneage, one of H.M.S. Powerful’s other Officers who served throughout the siege of Ladysmith. Amongst others, it contains 38 rare photos taken during the siege of Ladysmith, mostly Naval Brigade related, with Officers, guns and including at least 2 photos with Carnegie.