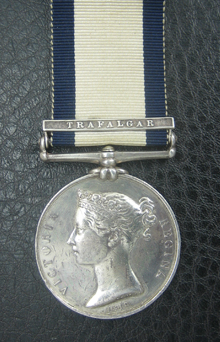 At the Battle of Trafalgar, HMS Mars formed part of Collingwood's leeward column, in third place behind the flagship and HMS Belle Isle and ahead of HMS Tonnant. Mars was heavily engaged and consequently heavily damaged during the battle, taking fire from five different French and Spanish seventy-fours. Among Mar’s 29 killed and 69 wounded in the action was her captain, George Duff.

““…HMS Royal Sovereign surged ahead of the rest of her column and broke through the enemy line of battle astern of the giant Spanish three-decker Santa Ana of 112 guns. The British first rate ship poured a broadside through the Spaniard's open and unprotected stern which felled the ships mizzen and main masts and left the Spanish giant a broken ruin with half her crew dead and wounded. She was followed by HMS Belle Isle, which quickly found herself surrounded by the enemy. As she passed the now crippled HMS Belle Isle, HMS Mars found herself being raked from ahead by fire from the San Juan Nepomuceno (74), Pluton (74), Monarca (74) and Algeciras (74). Captain Duff ordered a course to break the enemy line between the San Juan Nepomuceno and Pluton. The Pluton's commander on guessing Captain Duff's intention, made more sail and pulled ahead, so Captain Duff ordered an alteration, to pass ahead of the San Juan Nepomuceno. As she did so, HMS Mars was followed by the Pluton. By now, HMS Mars' rigging and sails had been cut to pieces, the ship was barely manageable and Captain Duff was forced to order the ship to come head to wind in order to avoid a collision with the giant Santa Ana. This left HMS Mars' stern exposed to the fire of the Algeciras and the Monarca. At this point, HMS Tonnant came up and engaged both the Algeciras and the Monarca. By now, HMS Mars was completely unmanageable and came under a heavy fire from the Fougueux (74). While HMS Mars was engaged against the Fougueux, the Pluton worked her way across her stern and raked the ship from stern to bows. Captain Duff who was leaning over the side of the ship at the break of the quarterdeck shouting encouragement to his lower gundeck gunners was struck at the base of the neck by a round shot from the Pluton which decapitated him and threw his headless body onto the gangway. Two seamen who were standing close behind him were also killed by the same shot. Thankfully, the Fougueux made off towards where HMS Temeraire (98) was supporting HMS Victory and the Pluton made off to support the Spanish Admiral Gravina. On the death of Captain Duff, command devolved to the first lieutenant, Mr William Hennah.

In addition to her captain, HMS Mars also suffered Mr Alexander Duff (Masters Mate), Mr Midshipmen Edward Corbyn and Henry Morgan, 17 seamen and 8 Royal Marines killed, with Lieutenants Edward Garrett and James Black, Mr Thomas Cook (Sailing Master), Mr Thomas Norman (Captain of Royal Marines), Mr Midshipman John Young, George Guiren, William John Cook, John Jenkins and Alfred Luckraft, 44 seamen and 16 Royal Marines wounded. In terms of damages, HMS Mars had her spanker boom shot away, all three lower masts, the fore topmast, the fore yard and the main yard badly damaged. The lower fore mast was so badly damaged that later that day, it fell over the side. In addition to this, the main part of her rudder was badly damaged, the stern was badly damaged, much of her poop deck had been destroyed, some of her lower gundeck guns had been knocked over and she had several shot holes in her lower hull.

In accordance with his wishes, Captain Duff was buried at sea along with his dead sailors. A memorial was erected in his honour by a grateful nation in the crypt of St Pauls Cathedral, London, next to the tombs of Nelson and Collingwood.”

NAMING OF THE MEDAL AND GREENWICH HOSPITAL ENTRY BOOKS:

Medal is contemporarily and very likely officially re engraved in what very much appears to be a Hunt & Roskell style. At this time Hunt & Roskell were naming Royal Naval Long Service medals, which would be issued as singles or in small batches and it is likely a single slightly later issue Naval General Service medal would be sent to them too.

Medal measures out over 36mm which would normally mean a medal had not been erased and re engraved. It shows no clear erasure marks but between the ‘M’ and ‘P’ of ‘Crump’ is a small dot which ‘looks’ like the remains of an impressed full stop. Given its position on the medal and despite the measurements etc, the medal must have been erased and re engraved. Quite possibly the original impressed naming was very lightly done, bar a single full stop, something common enough on these medals. General age wear has then obscured any evidence of this erasure.

Medal is noted selling at Glendining, December 1904, the message roll noting “may be engraved”.

The original medal roll lists Crump as a ‘Boy’ of H.M.S. Mars at the battle of Trafalgar but with ditto for Marine also. Medal roll gives the medal issue reference S/704 and “sent G.G. to G Hosp. Oct 1852”, ie sent to Greenwich Hospital in October 1852. This is a significant date because the application date for Naval General Service Medals had closed in April 1849 and strictly speaking, Crump should no longer have been able to receive a medal. However it seems an exception had been made, probably as he was applying through the Greenwich Hospital.

William Crump aged 63 from Sheffield was entered into the books of the Greenwich Hospital on 3 September 1852. He had served 10 years, 10 months, wasn’t wounded but noted as a Marine and present at the battle of Trafalgar. This would have meant he was aged between 16 and 17 at Trafalgar, which would suggest the medal roll was correct and Crump was a Boy Marine (or an underage Marine).

There is nothing 100% conclusive that can say Crump’s medal was sent to Hunt & Roskell for naming and had this medal been issued circa 1848/50 when the bulk of medal went out, it would be very unlikely indeed to have been anything but impressed. However men noted as having later duplicates sent on the original roll (for lost or such medals) are noted as extent with Hunt & Roskell type naming, using erased stock. As such, it would make sense that any later issues would be issued in the same way. With an impressed Trafalgar clasped medal to H.M.S. Mars likely to currently retail in the region of £9,000 plus and an original Trafalgar clasp (not including the medal), around £2000, this medal has been priced accordingly. Hopefully future research will shed more light on the issue of this medal. Crump’s service pre and post Trafalgar have not as yet been researched.