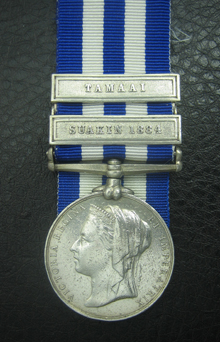 EGYPT AND SUDAN 1882 TO A ROYAL MARINE OF H.M.S. "EURYALUS" WHO SERVED WITH THE NAVAL BRIGADE DURING THE EGYPTIAN CAMPAIGN OF 1882, SUAKIN 1884 CAMPAIGN AND AT THE BATTLE OF TAMAAI

John O'Hanley was born on 8 October 1862 in Anderson, Glasgow. He enlisted in the Royal Marines on 8 October 1880, giving his trade as dresser. After a time with the Plymouth Division he was drafted to the Euryalus on 11 January 1882, serving on her until 23 July 1885. Rear Admiral Hewett sailed to Suakin and landed a brigade of 150 seamen and Royal Marines from Euryalus, Ranger and Coquette, to hold the fort at El Teb. Soon a larger British force arrived by sea from Port Said and India. Led by General Graham, a 3,900 man column, including a Naval Brigade of about 600 men from Euryalus, Carysfort and four smaller ships, marched inland from the nearby port of Trinikat. On 29 February 1884, they attacked a Dervish army of nearly 10,000 at El Teb. After numerous brave attacks by the Arabs, many of whom died vainly rushing the machine guns and rifles of the British squares, the British took the town driving the remaining rebels off into the desert.

The force re-embarked in the ships and moved along the coast to Suakin, disembarking again to march inland to Sinkat. They were stopped at Khor Ghob on 12 March by a huge Dervish army and encamped for the night. During darkness Commander Rolfe, the Commander of Euryalus, crept out through the enemy lines to gather intelligence. This information enabled General Graham to launch a new attack against the Dervishes in the morning at Tamaai. In this Battle over terrain divided by a nullah, the squares became separated and broken up. The force rallied into smaller squares, but the Naval Brigade advanced ahead of its machine gun ammunition, and was reduced to hand-to-hand fighting in retreat, with 10 men being killed in action. The British force regrouped however and, led by the Royal Marines, crossed the nullah to win the day. About 2000 Arabs and 109 Britons were killed - these included Lieutenant Montresor of Euryalus (whose memorial is in St Ann's Church in Portsmouth).

O'Hanley had later seagoing appointments including on the Curlew and Amphion. He was discharged on 2 December 1892. He thence enlisted into the Army in April 1900 into the Rifle Reserve Regiment, then in September 1902 joined the Royal Garrison Regiment which took him to Gibraltar.

Approximately 63 Medals with this clasp combination awarded to the Royal Marines and Royal Navy.

Condition NVF, some pitting and edge wear from Star. Sold with copy research both paper and on CD. Ex DNW 2016.