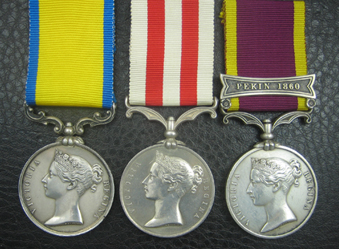 A VERY FINE GROUP TO AN OFFICER OF THE INDIAN NAVY WHO AFTER SERVING IN OPERATIONS AT THE OUTBREAK OF THE SECOND CHINA WAR IN 1856-7, WAS MENTIONED IN DESPATCHES DURING THE INDIAN MUTINY FOR HIS SERVICES WITH THE INDIAN NAVAL BRIGADE IN THE ACTION AT JEHENABAD ON 22 AUGUST 1857 AFTER WHICH HE WAS ATTACHED TO THE SHANNON BRIGADE. HE WAS LATER SPECIALLY THANKED FOR HIS SERVICES IN THE EXPEDITION AGAINST THE WAGHERS AT DWARKA IN SEPTEMBER 1859, DURING THE COURSE OF WHICH ACTION HE RECEIVED A WOUND, BUT CONTINUING TO DIRECT HIS MEN, A SECOND BULLET SMASHING THE HILT OF HIS SWORD. TAKING PART IN THE FINAL OPERATIONS AGAINST DWARKA FORT WITH THE NAVAL BRIGADE. IN 1860, HE TOOK PART IN THE EXPEDITION TO CHINA WHICH RESULTED IN THE TAKING OF PEKIN

George Charles Parker was born in Havant, Hampshire, on 19 February 1836, the son of a Captain in the Royal Marines, and was educated at the New Cross Royal Naval School. He was appointed a Midshipman in the Indian Navy on 3 April 1853 and after serving on a number of ships, was appointed to Auckland on 1 August 1855 and served under Admiral Sir Michael Seymour’s command in Chinese waters from August 1856.

Initially under orders of Captain Sir William Hoste, Auckland was tasked with keeping down piracy off the coast of Borneo and protection of the British settlement of Labuan. In December 1856, Auckland was ordered to Hong Kong to reinforce the squadron under Admiral Seymour. Here they were in action against piratical and Mandarin junks, destroying five and burning and destroying two batteries mounting thirty guns at Lanato. Soon after, Auckland was engaged against a fleet of eighty Mandarin junks at Second Bar Creek on the Canton River, sinking a number of them. Taking part in several other actions, including the cutting out of a junk and the destruction of a battery protecting it on the Bay of Tung Chung, in April 1857, Auckland soon after departed for Hong Kong, H.M.S. Inflexible having arrived and taken her place. Arriving in Singapore in May that year, Auckland was recalled to Calcutta on the outbreak of the Indian Mutiny. Here all available crew, including Midshipman Parker, were sent up country in a newly formed Naval Brigade.

On the outbreak of the Great Sepoy Mutiny, Parker was assigned to No. 3 Indian Naval Brigade under Lieutenant Batt, who had commanded Zenobia at the time of the outbreak. The Brigade, which consisted of Lieutenant Batt and 100 men, along with four guns, from Auckland under Midshipman’s Parker, along with Midshipman Hanay and Scamp, departed up-country from Calcutta in the small river steamer Jumna in July 1857. Tasked with delaying entry into the Goruckpore District by mutineers, they were present in the action at Jehenabad, above Allahabad, on 22 August 1857, where Midshipman Parker was sent in command of a boat to cut out and destroy some boats laden with captured Government stores. The enemy, however, were present in great numbers, lining the banks and in occupation of a thick wood close by the river, and opened a fire so fierce that Midshipman Parker received the signal to retire. The Jumna and her boats now advanced to the attack and, after engaging the enemy for six hours, succeeded in shelling the enemy out of their positions and destroying their boats. For his services during the Mutiny Parker was Mentioned in Despatches.

Lieutenant Batt and his command shortly after returned to Allahabad, where Captain Peel attached them to the Shannon Brigade, with the intention of taking them with him up to Lucknow. This was not sanctioned by the government and Zumna, was ordered to Buxar. However it seems either at this point or shortly after, Midshipman Parker was attached to the Shannon Brigade, the 'History of the Indian Navy', United Service Magazine, Vol 145, 1877, noting that soon after the auction of the 22 August 1857;

“Soon after Mr. Parker was temporarily attached to the Shannon Naval Brigade , and arrived at Bombay in charge of wounded soldiers and seamen on 11th July , 1858”

How long Parker was attached to the Shannon Brigade is ……………………

SEE PDF FOR FULL WITE UP

Note; although this group has been known as it is since at least 1996, there is nothing to suggest the recipient’s entitlement to the Baltic Medal and it may be that the medal was one of his brothers who served in the Royal Navy. As such, this group can be purchased without the Baltic medal for  170 less than the overall asking price.