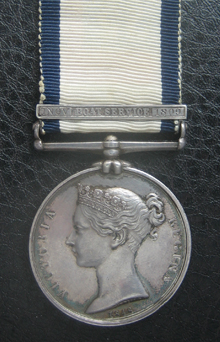 Thomas Bruckwith was born at Ripon, Yorkshire, and served as an Ordinary Seaman aboard H.M.S. Cumberland for the boat service action in the Bay of Rosas on 1 November 1809, when a French convoy of five warships and various merchant vessels was captured or destroyed. Approximately 110 clasps issued for this action. Bruckwith a unique name on the medal roll.

In late October 1809, Seven French merchant vessels, in charge of the armed store-ship Lamproie, of 16 long 8-pounders and 116 men, two armed bombards, the Victoire and Grondeur, and the armed xebec Normande, put into the bay of Rosas, and anchored under the protection of the castle of that name, of Fort-Trinidad, and of other strong batteries in the neighbourhood. Resolving to attempt the capture or destruction of these vessels, Lord Collingwood detached Captain Hallowell, with the 74’s; Tigre and Cumberland, the frigates Volontaire, Apollo, Topaze, the brig-sloops Philomel, Scout, and Tuscan on this mission.

On the evening of the 31st of October, after dark, the squadron bore up, with a fresh south-east wind, for the bay of Rosas ; and soon afterwards the five ships came to an anchor about five miles from the town of Rosas ; but the brigs, as had been ordered, remained under way. The boats of the squadron were then armed and manned, with every suitable arrangement having previously been made, the boats, commanded by Lieutenant John Tailour, first of the Tigre, pushed off, with characteristic ardour, to execute the business assigned them. Apprehensive that an attack could be made upon them, The French had used every preparation to meet and repel it. The Lamproie was enclosed in boarding-nettings, and a gun-boat, or armed launch advanced ahead of her, to give notice of the enemy's approach : the bombards and xebec, and the batteries on shore, were also on the alert. The boats approached, the alarm-gun fired ; and, rending the air with their cheers, the British seamen and marines stretched out, each division of boats taking its allotted part.

The Lamproie was boarded at all points, and, notwithstanding a very spirited resistance, was carried in a few minutes. The Victoire, Grondeur, Normande, and a felucca armed with musketry, defended with equal gallantry, shared the same fate. All this was effected in the face of a heavy fire from the castle of Rosas, Fort Trinidad, and several other batteries, and of repeated vollies of musketry from troops assembled on the beach. Notwithstanding that the force opposed to the British was double what they had reason to expect, such was their alacrity in subduing it, that, at the opening of day on the 1st of November, every French vessel of the 11 was either burnt at her moorings, or brought off by the aid of a light air of wind from the land.

The loss sustained by the British was severe, amounting to 15 killed and 55 wounded. The loss on the part of the French has not been recorded ; but, from the obstinacy of their resistance, it must have been extremely severe.

Bruckwith’s surname is variously spelt Bruckwith, Brickwith on the medal rolls and Brickworth on the ships muster rolls. Clearly all the same man with no other names remotely similar. Muster rolls have not been searched pre or post 1809 so its not clear if he had any earlier or later service.