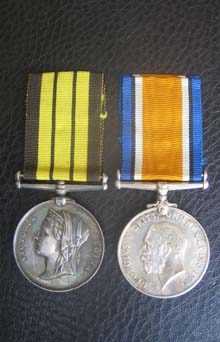 Lieutenant Colonel Henry Yeatman Hext, joined the Royal Marines as Lieutenant 6th December 1867. Between this date and being promoted Captain on 1st July 1881, he served at Plymouth HQ and HMS Adriane from December 1871 until August 1873 before returning to Plymouth HQ.

On 15th December 1873 he embarked on the Transport ‘Thames’ with the Marine Battalion for service in then Ashantee Campaign. During the Campaign, the Royal Marine ‘African’ battalion were born on the books of HMS Active. Hext’s papers note service aboard (more likely born on) HMS Himilaya, Nebraska and Victor Emmanuel during the campaign. Hext was landed with the Marine ‘African’ battalion though as the battalion did not cross the River Prah during the campaign, they did not receive the clasp to his medal.

Returning home at the conclusion of the campaign, he next served in HMS Resistance and HMS Achillies, then back to Plymouth HQ. From 1881 until promoted Major on 20th Nov 1889, he served on HMS Hibernia, Musketry Instructor for the Mediterranean Fleet, Plymouth HQ and the Royal Naval college, being made brevet Major 6th Dec 1888. HMS Trafalgar 1890 and musketry Instructor at Portsmouth 29th Jan 1891. He was placed on the retired list at his own request on 6th October 1893. His records claim he served with the Imperial Yeomanry during the Boer War but does not seem to be listed on the medal roll (Army or Navy). On 13th Oct 1914 he was appointed recruiting Officer for the Exeter District, promoted Lt Colonel 25th July 1916 and finally relinquished his appointment as Recruiting Staff Officer on 1st Fen 1919. For his WW1 service he was Awarded the BWM only

Condition couple minor EK’s to 1873, otherwise GVF, unusual RM Officer pair, with service record on CD. Only 16 Royal Marine Lieutenants received the Ashantee medal, all but four without a clasp.