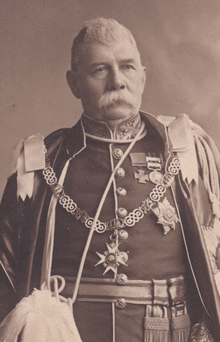 "Lieutenant Prendergast, Madras Engineers, was specially mentioned by Brigadier, now Sir Charles Stuart, for the gallant act at Mundisore, when he was severely wounded; secondly, he was specially mentioned by me when acting voluntarily as my Aide-de-Camp in the Action before besieging Ratgurh on the Beena river, for gallant conduct. His horse was killed on that occasion. Thirdly, at the action of 'the Betwa', he again voluntarily acted as my Aide-de-Camp, and distinguished himself by his bravery in the charge, which I made with Captain Need's Troop, Her Majesty's 14th Light Dragoons, against the left of the so-called Peishwa's Army, under Tantia Topee. He was severely wounded on that occasion”

Sir Harry North Dalrymple Prendergast (1834-1913) was born on 15th October 1834 in Madras, India, the son of Thomas Prendergast of the Madras Civil Service and Lucy Caroline, daughter of Martin Dalrymple of Cleland and Fordell in Scotland. Harry was sent to England for his education, and was firstly privately educated in Cheam, Surrey, then at Brighton College, before attending Addiscombe Seminary, prior to entering the Royal Engineers as a 2nd Lieutenant in 1854. Prendergast was soon serving in Persia with “B” Company Madras Sappers and Miners under the command of Major (later Colonel) Archibald John Maddy Boileau, before returning to India in July 1857 following the outbreak of the Mutiny.

On 21st November 1857, 300 cavalry accompanied by Lieutenant Prendergast (now Aide-de-Camp to Colonel Durand) reconnoitred country in advance of the column. The detachment was under strict orders not to engage with the rebels but suddenly Indian rebel valaitees (Afghan mercenaries) opened fire and the small British force counter-attacked. At this point, Lieutenant George Meyrick Dew of the 14th Light Dragoons was ahead of the group and no accurate formation could be held. The small party of British soldiers were scattered amongst the rocks, streams and trees. At this point, Prendergast observed a rebel come out from behind a hedge and aim at Dew who was passing by, unaware of the man’s presence. Prendergast shouted a warning and rode at the rebel; who heard his shout and turn his matchlock towards Prendergast. As Prendergast got closer, the rebel opened fire, and the musket ball hit him in the ribs, close to the heart. It was then that a comrade, Sutherland Orr rode up and killed the rebel.

The following day, Durand drove the rebels, who were holding the nearby village, back into Mundisore. Hearing reinforcements were coming, he intercepted them at Goraria and after a heavy artillery barrage, forced 200 rebels to surrender. Learning of this defeat, the 2,000 rebels in Mundisore evacuated the town and fled. Durand then marched his men to Indore, to join other British forces under their newly-appointed commander, Lieutenant-General Sir Hugh Henry Rose.

Meanwhile, Prendergast’s condition was worsening. He was attended to by various surgeons who recommended different courses of action. Eventually, an expert military surgeon, William Mackenzie, managed to cut out the bullet, just in time to stop the onset of gangrene. Prendergast was soon back in action, and was again wounded by a sword cut to his left arm at Jhansi in January 1858. In a later battle, the British captured the hill fort of Ratghur, during which he had his horse shot out from under him, and he was shot in the arm. Prendergast was then invalided back to Britain on sick leave, and on Wednesday, 4th January 1860, Queen Victoria presented him and 26 other Mutiny VCs with their decorations at Windsor Castle.

As Prendergast noted “It was a foggy, gloomy day and Horse Guards and Foot Guards were drawn up on parade….The recipients had to advance a few steps in line towards her Majesty which we did in slovenly style, and then each in succession stepped forward, and the decoration was attached to our breasts.”

After the Mutiny, he was progressively promoted to Major and took part in the Ambela Campaign of 1863. He married Emilie, daughter of Frederick Simpson, and they went on to have eight children. He then served in the Abyssinian Campaign of 1868, being mentioned in despatches for his role in the capture of Magdala. He was created a Companion of Bath in 1875, and promoted to Colonel. He was then given command of the Madras Sappers and Miners, a role he held until 1880. As a Major-General, he was given command of the Burma Field Force in the war of 1885-1886, and in 1892 he retired as a knighted Lieutenant General. He was created a GCB in 1902, and on 13th December 1904, he received the Freedom of the City of London. He then lived in London where he sat on the organizing committee for the Golden Commemoration of the Indian Mutiny veterans held at the Albert Hall on 23rd December 1907. The committee was chaired by Earl Roberts VC. Two hundred and fifty of the surviving 342 officer veterans and 544 out of the 950 NCO and ordinary soldier veterans attended. He played a leading role in raising charity funds for Indian Mutiny veterans which allowed 83 to leave the workhouses and relieved 243 from living on the Poor Law. After catching a chill, he died at his home in Richmond, Surrey on 24th July 1913. He was buried in Richmond Cemetery, and his grave was recently renovated in 2015. His medals are held and displayed by the Royal Engineers Museum, Chatham, Kent.