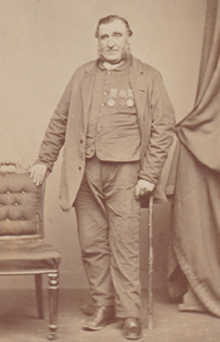 A SCARCE VICTORIA CROSS CARTES DE VISITE OF PRIVATE HENRY ADDISON WHO WAS AWARDED THE VICTORIA CROSS FOR ACTIONS DURING THE INDIAN MUTINY, IN KURREREAH, IN WHICH HE DEFENDED A VILLAGE ON FIRE FROM THE ENEMY, SAVING LIEUTENANT JOHN OSBORNE'S LIFE IN THE PROCESS

“For gallant conduct on the 2nd of January, 1859, near Kurrereah, in defending, against a large force, and saving the life of Lieutenant Osborn, Political Agent, who had fallen on the ground wounded. Private Addison received two dangerous wounds, and lost a leg, in this gallant service”

Henry Addison (1821-1887) was born in the village of Bardwell, Suffolk in February 1821. He enlisted with the 43rd (Monmouth) Light Infantry and by the time of the Indian Mutiny, he and 29 of his fellow 43rd were part of a 226 man Saugor Field Force, under the command of Lieutenant-Colonel Gottreux of the Madras Army. In a report, Gottreux wrote that he learned that a band of rebels were in the jungle covered hills near a village called Kurrereah. The small column approached the rebel camp at dawn on 2nd January 1859.

At 5.30am, they approached the rebel camp and immediately came under enemy fire. The enemy then began to retreat, leaving behind their baggage ponies. As the Field Force moved forward, they were repeatedly engaged in hand to hand combat with rebels who were hiding in the ravines and jungle. Lieutenant Willoughby Osbourne, Political Agent of Rewah, was wounded by a sword cut on the right hand. He was at the time he was attacked, closely followed by three men of the 43rd. One of these men was Henry Addison, who seeing Osbourne attacked and on the ground, rushed forward to defend and cover him. Addison was severely wounded by two sword cuts in this action, one of which was on the left leg, which needed amputation above the knee. The other wound was a compound fracture of the left fore-arm. Addison had managed to save his officer’s life despite his horrific wounds.

Addison survived his injuries and was recommended for the VC, which was gazetted on 2nd September 1859. After a long period of recuperation, he was able to attend his investiture at Windsor Castle on 9th November 1860. Addison returned to his native Bardwell, where he lived the rest of his life. He died on 18th June 1887, aged 66, and was buried in Bardwell Parish Churchyard. His medals are held by the Royal Green Jackets Museum, Winchester.