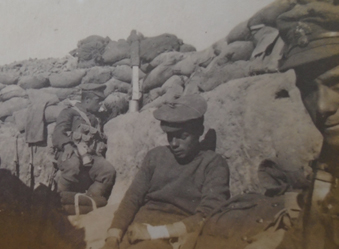 A large hardbound photograph album measuring 27 x 36cm which details a soldier of the 1/6th Manchester Regiments service at Gallipoli, Malta and Egypt during the Great War. Album consists of photographs, newspaper cuttings and postcards over approximately 27 pages, the majority relating to the Gallipoli campaign. The beginning of the album starts with a large number of pages of newspaper cutting, mainly relating to Gallipoli, then onto photographs, followed by postcards; mainly from Egypt.

Photograph wise, there are approximately 120, mostly 4.5 x 6.5cm, though some a bit larger or postcard size. Subject of the photos mainly appear to be taken at Gallipoli (approx 70), though there are clearly a number taken in Egypt too and a few civilian. With the Gallipoli photos, there are some superb and rarely seen photographs taken in the trenches, battlefields, graves, Turkish prisoners, wounded aboard ship, some good boat landing shots, the Gallipoli peninsular/ beaches, ships etc. Most appear to be Manchester Regiment but there are clearly men from other battalions and various of Australians. On the main, quality of the photos is very good, some a bit faded; mainly ships off the coast which are slightly larger. Many of the photos, and almost all the Gallipoli ones are in the PDF listing and I have included a few pictures of pages with Newspaper cuttings and postcards. With the latter two, there are a good number more similar pages but these should give an idea of content.

There are also a couple of original 127th Brigade Orders of the Day from 1918, which suggest the owner served in France later. To back this up, there is a newspaper cutting of a photo of 53 original Officers and men of the 6th Manchester’s who served throughout Gallipoli and were still serving at the end of the War with one of the Officers with a cross who may be the owner. Most of the photographs appear to be NCO’s/Men, so possibly the owner was Commission later from the ranks. The vast majority of photographs are stuck down but there are a few loose, some with names and though it’s not clear the owners name. There are also a couple of watercolour painting within the album by a C C Lawton and the same name appears on the back of a couple of photos but again, other names are noted. With a bit of time and luck, the owner may be established. Photographs of wounded British and Australian troops on board ships and a couple of group photos taken in hospital in Malta in mid June 1916, suggest the owner was either sick or wounded around that time. The battalion was heavily engaged during the Third Battle of Krithia, on 4 June 1915.

Album is in overall good condition, with a couple of pages loose and the outer spine of the album is missing. These are also a few loose photos/postcards etc. Album weights just over 3KG.

Its exceptionally rare to find albums relating to Gallipoli and this album has some great content.