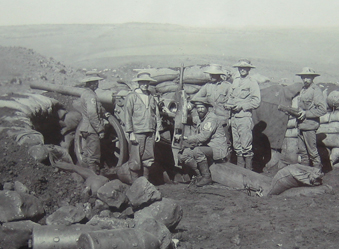 A VERY RARE PHOTOGRAPH ALBUM BELONGING TO A NAVAL OFFICER WHO WAS BESIEGED IN LADYSMITH WITH H.M.S. POWERFUL’S FAMED NAVAL BRIGADE 1899- 1900. ALBUM HAS MANY FINE AND RARE IMAGES OF THE NAVAL BRIGADE DURING THE SIEGE AS WELL AS OTHERS OF U.S. TROOPS DURING THE PHILIPPINES WAR, NAVAL PERSONNEL, WARSHIPS AND A VISIT TO JAPAN

Album belonged to Lieutenant, Later Admiral, A.W. Heneage, who served with H.M.S. Powerful in the 1890’s, including during the Boer War when he served with Powerful’s Naval Brigade during the siege of Ladysmith. 39 photographs show wartime activities of Powerful’s Naval Brigade personnel, guns and positions at Ladysmith during the Siege. Other photos include the ships visit to Japan, fleet and ship shots, many of Naval personnel aboard ship plus many views of the Philippines, including U.S. Troops during the Philippines war and one of a Scouts group in 1925 including Baden-Powell etc etc. A large number of the photos can be seen on the PDF write up. The album measures 31 x 41cm, hardbound with red leather covers inscribed ´A.W.H.´ in gold-tooled letters. Photographs range from very large 27 x 21cm (one per page), a large number at 20 x 15cm, with the majority of the Ladysmith siege Photos at 8.5 x 8.5cm with a handful a bit larger. There are 29 pages in all with photographs on both sides of each (58 pages) with some 125 photographs in all, the majority with captions.

Admiral Algernon Walker Heneage, C.B., M.V.O., born 1871, the son of Major C.W. Heneage, V.C.; joined the Royal Navy in 1886; served as Lieutenant in H.M.S. Powerful, and was mentioned in Captain Lambton´s Despatch for the Defence of Ladysmith, ´Lieutenant Heneage has conducted the duties of Senior Executive Officer entirely to my satisfaction´ and also mentioned in Sir George White´s despatch of 2.12.1899, specially promoted to Commander for this service, May 1900; commanded H.M.S. Spartan as escort ship to Queen Alexandra during her Majesty´s visit to Norway and Denmark, 1904 (M.V.O.); commanded the 1st Squadron Minelayers, August 1910 to August 1912; service during the Great War included in command of the battleship H.M.S. Albion (C.B. 1916; twice M.I.D.; France, Legion of Honour; Japan, Order of the Rising Son, 2nd Class).

A very good article on Powerful’s naval Brigade at Ladysmith can be found here: https://www.britishempire.me.uk/hms-powerful-and-the-naval-brigade-in-ladysmith.html

Condition, spine restored, otherwise in good condition, almost every photo very clear. Album is very large and heavy at 3.5KG and postage will be expensive if being sent outside the UK.

A rare Royal Naval Officers photograph album for this period full stop. However the addition of so many photographs taken of H.M.S. Powerful’s famed Naval Brigade during the Defence of Ladysmith adds another level to its rarity. Ex Spink October 1999.