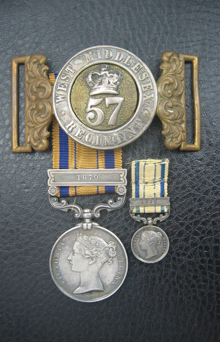 Sydney Edwin Bellingham was born in April 1853, the son of William Johnstone Bellingham, late 50th Regiment, and a grandson of Sir Alan Bellingham, 2nd Bt., of Bellingham Castle, Co. Louth. Educated at Cheltenham and Trinity College, Dublin, he was appointed a Lieutenant in the 57th Regiment direct from the Louth Rifles, and witnessed active service in South Africa in 1879, when he was present at the battle of Ginghilovo, the relief of Etshowe and in the advance of Crealock’s Division to Port Durnford, in addition to the operations undertaken by Clarke’s Column (Medal & clasp). He subsequently served as Regimental Transport Officer in the Mahsud Waziri Expedition of 1881, for which no medal was awarded, and latterly as Adjutant of the Hyderabad Rifle Volunteers. He died at Quetta in November 1893, aged 40, by then having attained the rank of Major.

The 57th reached Fort Pearson on the 26th March, and was there detailed to 1st Brigade of the Column. The advance into the enemy’s country was commenced on the 29th. At the battle of Gingindlovu, which ensued on the morning of the 2nd April, the regt. held the right flank face of the laager and assisted in repelling the first desperate onslaught of the enemy. It was specially mentioned in Lord Chelmsford’s despatch describing the battle as being distinguished for its steadiness under fire. On the 3rd the Column marched into Eshowe, and relieved Col. Pearson’s force.

The regt. subsequently formed part of the 2nd Brigade of Crealock’s Div. It advanced to Fort Durnford, burning Zulu homesteads, the chief of which was Ondine, and disarming the coast tribes. Subsequently to the arrival of Sir Garnet Wolseley it formed part of Clarke’s Column in the second advance and occupation of Ulundi, where it remained for three weeks, and was employed in the pursuit and capture of the King. It then returned to Natal via Entumeni and Middle Drift, assisting in the subjugation of the border tribes in the neighbourhood of the Lower Tugela.

Condition VF Small EK to 1st or better. A scarce medal group to a ‘Diehards’ officer who fought at the battle of Gingindlovu. Ex DNW 2014.