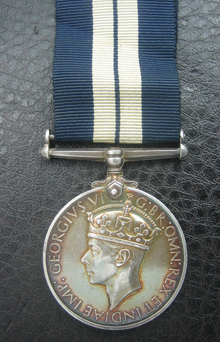 A FINE SECOND WORLD WAR SUBMARINER'S D.S.M. AWARDED TO A CHIEF ENGINE ROOM ARTIFICER, ROYAL NAVY, WHO WAS DECORATED FOR HIS GALLANT SERVICES IN H.M. SUBMARINE CLYDE ON THE MALTA RUN. THE VERY SURVIVAL OF MALTA HAS RIGHTLY BEEN ATTRIBUTED TO THE HEROIC CONVOYS THAT FOUGHT THEIR WAY THROUGH TO THE EMBATTLED ISLAND AT HUGE COST, NOT TO MENTION THE GALLANT RESOLVE OF HER GARRISON AND PEOPLE. BUT IN A LESS RECOGNISED YET EQUALLY IMPRESSIVE CAMPAIGN TO RE-SUPPLY THE BESIEGED ISLAND, THE APTLY NAMED 'SILENT SERVICE' PLAYED A VITAL ROLE

'For outstanding devotion to duty as outside E.R.A. of H.M. Submarine Clyde during six passages to Malta carrying supplies, including petrol for the garrison. These passages were made in the face of enemy mine-laying, patrol activity and air attacks. He has been untiring in the maintenance of the auxiliary machinery of H.M. Submarine Clyde and in dealing with defects, in particular on one occasion when the after hydroplane operating gear broke down and the planes had to be secured from outboard.'

The very survival of Malta has rightly been attributed to the heroic convoys that fought their way through to the embattled island at huge cost, not to mention the gallant resolve of her garrison and people. But in a less recognised yet equally impressive campaign to re-supply the besieged island, the aptly named 'Silent Service' played a vital role.

By way of example, it is worth studying H.M. submarine Clyde's 'cargo' during her sixth such foray to Malta in October 1942, an operation enacted in the face of enemy-mining, patrol activity and air attacks:

That such a vital 'cargo' reached Malta was entirely owing to the gallantry and skill of the submariners concerned, operating in appallingly difficult and cramped conditions.

A case in point would be Engine Room Artificer Edward Scott, who, on one occasion, exited Clyde to carry out urgent repairs, in the certain knowledge he would have been left to a grim fate if enemy aircraft or surface vessels appeared on the scene.

Edward Graydon Scott was born in Sunderland, Co. Durham on 29 May 1910 and entered the Royal Navy as an Artificer Apprentice in May 1928.

Having then joined the submarine branch in the mid-1930s, he was serving as an Engine Room Artificer 2nd Class in H.M. submarine Proteus on the outbreak of hostilities in September 1939.

Initially based in the Far East, Proteus undertook her first wartime patrol out of Hong Kong in January 1940, prior to being ordered to the Mediterranean, where she sank the Vichy French Rigault de Genouilly in early July. Having then undertaken further patrols off Messina, Calabria and Libya, she returned to the U.K. for a refit at the year's end.

H.M. submarine "Clyde" - opening shots and a close encounter of the sub-on-sub kind.

In February 1941, Scott transferred to H.M. submarine Clyde, commanded by Lieutenant-Commander D. C. Ingram, D.S.C., R.N., and it was in this capacity that he joined the 8th Submarine Flotilla at Gibraltar.

A flurry of operational patrols ensued in the western Mediterranean and in early June 1941 she sank the Italian merchantmen San Marco and Sturla, the former off Sardinia and the latter by gunfire off Maratea. A week or so later - on the 14th - the Italian patrol vessel V 125 met a similar fate, once again off Sardinia.

Then in September she had a running fight with three U-boats off Tarrafal Bay in the Cape Verde Islands, one of them - the U-67 - ramming Clyde. Commander Ingram's report takes up the story:

'A streak of white foam was then sighted broad on the starboard bow and the wheel was put hard to starboard towards. A few seconds later the conning tower of a U-boat was sighted and her course was thought to be the same as ours, parallel to us. It was evident that this U-boat must have just surfaced. Full speed was ordered as well as gun action. When Clyde began to swing it was noticed that the Uboat was on a much more converging course then first estimated and that she was also turning towards and there was fear that Clyde could be rammed amidships. Evasive action was taken. The U-boat did strike Clyde but aft on No.7 torpedo tube at 0332 hours. The U-boat started to dive shortly afterwards and was soon lost out of sight … '

As it transpired, it was the U-67 that sustained the most serious damage.

Meanwhile, regular submarine operations aside, one of Clyde's battery departments was converted into a cargo department, thereby setting in motion the commencement of her vital re-supply patrols from Gibraltar to Malta.

April 1942 witnessed her carrying out her first such mission, the last of her patrols under Commander Ingram and, as it transpired, an eventful trip. The scale of Clyde's 'cargo' on that occasion meant she had to spend three nights unloading it, then retreat to the depths by day. Nonetheless on surfacing from one such trip she was immediately attacked by machine-gun fire from an enemy aircraft, the resultant damage to her hydroplanes causing her a 'difficult' journey back to Gibraltar: here then the moment the gallant Scott was called upon to carry out urgent 'outboard' repairs.

In May 1942, Lieutenant-Commander R. S. Brookes, D.S.O., D.S.C., R.N., assumed command of Clyde and it was under him that Scott completed five further forays to Malta, the first of them at the end of the same month. The other re-supply missions took place in July, August, September and October, Clyde on one occasion being diverted to Beirut on account of Gibraltar's facilities being used up by ships allocated to Operation "Torch". It proved to be a beneficial diversion, for en route she sank the Italian Narvalo.

Details of H.M.S.Clyde’s service can be found here:

Scott departed Clyde in March 1943, when she arrived in the U.S.A. for a re-fit and he was placed on the strength of the 'stone frigate' Saker.

He surely witnessed further action in H.M. submarines before the war's end and finally came ashore as a Chief Engine Room Artificer in May 1950. Owing however to an earlier conviction for being found drunk on duty, he was not entitled to the L.S. & G.C. Medal.