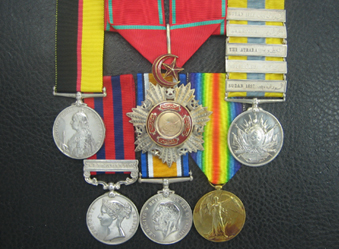 THE EXTREMELY FINE KING’S ROYAL RIFLE CORPS GROUP TO AN OFFICER WHO TOOK PART IN THE 1891 MANIPUR EXPEDITION, BEFORE BEING SECONDED TO THE EGYPTIAN ARMY AS SECOND IN COMMAND AND BIMBASHI OF THE 3RD EGYPTIAN BATTALION. TAKING PART IN THE NILE EXPEDITION OF 1897, INCLUDING THE BATTLE OF ABU HAMED (MID), HE FURTHER TOOK PART IN THE BATTLES OF ATBARA AND OMDURMAN DURING THE 1898 EXPEDITION (2 X MID AND BREVET MAJOR). TAKING COMMAND OF THE 3RD BATTALION, HE TOOK PART IN THE 1899 NILE EXPEDITION AGAINST THE KHALIFA (ORDER OF MEDJIDIEH ) AND AS ONE OF ‘KITCHENER'S MEN’ AND NOW TITLED EL KAIMAKAM BEY, WAS SELECTED BY KITCHENER AS GOVERNOR OF THE UPPER NILE PROVINCE IN 1900. LEADING AN EXPEDITION AGAINST THE NUER TRIBE, HE RETURNED TO RIFLE CORPS IN 1903 AND RETIRED IN 1905.A KEEN SPORTSMAN AND BIG GAME HUNTER, HE SETTLED IN NEW ZEALAND BUT AT THE OUTBREAK OF THE GREAT WAR, RETURNED TO COMMAND THE 13TH BATTALION, KINGS ROYAL RIFLES BEFORE TAKING COMMAND OF A CHINESE LABOUR CORPS. HE WAS MORTALLY WOUNDED IN FRANCE IN SEPTEMBER 1917

Arthur Blewitt was born at Pinner, Middlesex, on 19 February 1861. He was educated at Eton and was gazetted to his first commission in the West Yorkshire Militia in 1881 and transferred to the 4th Battalion 60th Rifles later, in 1883 at Ferozepore, India. He served in India and Burma until 1893, having in 1891 taken part in the Manipur Expedition (medal and clasp). In 1897 Blewitt was selected for service with the Egyptian Army and as 2nd in Command (with the Egyptian rank of Bimbashi) of the 3rd Egyptian Battalion. Taking part in the Nile Expedition of 1897, he was present at the battle of Abu Hamed and was mentioned in despatches for his services at the battle. Further taking part the Nile Expedition of 1898 with the 3rd Egyptian, he was present at the battles of Atbara and capture of Khartoum (battle of Omdurman) and was twice mentioned in despatches for his services and awarded the Brevet of Major.

In 1899, now Commanding the 3rd Egyptian Battalion, he served in the Nile Expedition against the Khalifa, receiving the third class Order of the Medjidieh for his services during the expedition. In 1900, he was selected by Lord Kitchener as El Kaimakam (Governor) if the Upper Nile Province of Fashoda and among other service, led an expedition, consisting 4 Officers and 140 men of the 10th Sudanese against the Nuer tribe under chief Denkur. In 1902, he was made El Kaimakam of Gezira - a post he held with much success until 1903, when he re-joined his regiment at Malta. For his services in the Sudan, he recived the Queen’s medal and the Khedives medal with 5 clasps. He then retired from the army in 1905.

Blewitt was a keen sportsman, big game hunter and traveller, frequently having shooting expeditions in India, Burma, Tibet, North America, South Africa and New Zealand. He was so attracted to New Zealand that he settled there, buying a farm at Teneko in 1905. Being a gallant Englishman, he returned to England to the call of duty at the outbreak of the Great War and volunteered for service. In September 1914, he was promoted Lieutenant-Colonel to command 13th Battalion, Kings Royal Rifles, which he successfully did in the U.K. until June 1915. He was in charge of training camps and was subsequently sent to China to recruit a team of coolies to work in France, bringing them back to Europe in a chartered steamer.

Lieutenant-Colonel Blewitt died of wounds received in an air raid while commanding the 5th Labour Battalion at Andrique, France on 4th September 1917, aged 56. During the air raid, bombs hit the Chinese compound resulting in 14 Chinese labourers being killed and three Officers, including Blewitt, mortally wounded. Numerous other labourers were wounded.

A witness described the events:

“A week or so ago Monday night, we had an aeroplane raid in which over 20 German aeroplanes took part. The raid lasted from 9pm to 3am or six hours.. At first we stood outside our mess quarters until shrapnel from our anti aircraft guns began to fall about us..”

“Advice has been received in Christchurch of the death in France of Lieutenant-Colonel A. Blewitt, of the 60th, Rifles., and late of Terako, Amuri. The late Lieutenant-Colonel Blewitt, who was about 55 years o£ age, was educated at Eton, and had had a distinguished career, being one of "Kitchener's men." He was one of the first Governors of Fashoda, and afterwards of the Khartoum provinces. On the termination of these appointment, he rejoined his regiment in India. He spent his leave in 1904 in New Zealand, and was so impressed with the Dominion that he retired from the Army, and settled here, taking up the Terako property. On the outbreak of war he returned to England and offered his services to the government holding several appointments in charge of training camps, one of them at Salisbury Plain. He was sent by the British Government to China to arrange for a shipment of coolies to work in France, and brought them back with him in a chartered steamer. At the latest advice received he was in charge of a labour group in France and it was while he was engaged in that work that he met his death. Colonel Blewitt was an enthusiastic and experienced big-game sportsman. He was universally popular, and was held in high esteem by his employees.”

Note: When researching his service in the Sudam, Blewitt will most often be found under the title Bimbashi or El Kaimakam Blewitt Bey.

N.E. FRONTIER 1891 clasp: This clasp was awarded to Officers and men, predominantly from the Indian Army, who took part in the 1891 expedition to Manipur, a small State adjoining Burma and Assam. A wing of the 4th Battalion, Rifle Brigade was the only British Regiment that took part in the Campaign, 443 medals and clasps being issued.

SUDAN 1897 clasp: Not for any particular action but for those troops who had already been granted the medal and who served at and South of Kerma on the Nile or South of No. 6 Station on the Abu Hamed Railway between the 15th July and 6th November, 1897.

ABU HAMED clasp: To the troops belonging to Major Hunter’s Force who were employed in the battle and capture of Abu Hamed, 7th August, 1897, the reconquest of the Province of Berber, the defeat of Emir Mahmud's army on the Atbara and the final operations resulting in the overthrow of the Khalifa's troops in Khartoum.

“The Battle of Abu Hamed occurred on 7 August 1897 between a flying column of Anglo-Egyptian soldiers under Major-General Sir Archibald Hunter and a garrison of Mahdist rebels led by Mohammed Zain. The battle was a victory for the Anglo-Egyptian forces, and secured for the British the strategically vital town of Abu Hamed, which was the terminus for trade and transportation across the Nubian Desert. Abu Hamed was of critical importance to Lord Herbert Horatio Kitchener, leader of the Anglo-Egyptian campaign that commenced in March 1896 with the objective of destroying the Mahdist state that had occupied much of Sudan since the initial Mahdist rebellion broke out in 1881. The town was to be the railhead for Lord Kitchener’s supply railway through the vast and inhospitable Nubian Desert, allowing expeditionary forces to bypass a great stretch of the Nile on their way to Omdurman, the capital of Mahdist Sudan. However, the town was occupied by Mahdist forces, and construction of the desert railway could not safely proceed without their removal. Accordingly, Kitchener ordered a flying column, led by Major-General Sir Archibald Hunter and composed of around three-thousand Egyptian soldiers, to march from Merowe to Abu Hamed with all possible speed. The flying column departed Merawi on 29 July 1897, and, marching north-east along the Nile for eight days, arrived at the town as dawn broke on August 7. Forming his battalions in a broad semicircle that pitted Abu Hamed’s defenders against the river, Major-General Hunter ordered his troops to advance at approximately six-thirty that morning. In the action that followed, the outnumbered Mahdist riflemen were driven from their defensive positions through the town, while a small contingent of Mahdist cavalry fled south without engaging to report the loss. By seven-thirty, the battle was over, and Major-General Hunter ordered the news be delivered to Lord Kitchener. Major-General Hunter's column lost eighty killed and wounded, while the quantity of Mahdist casualties is estimated to be between 250 and 850. The Mahdist commander, Mohammed Zain, was captured in the fighting. Soon after news of the victory spread, work on the desert railway was resumed and Abu Hamed reached on October 31, where Major-General Hunter and his column had remained. With the completion of the railway across the Nubian Desert, Kitchener's general advance into the heartland of Mahdist Sudan was guaranteed, and the greatest issue of Kitchener's campaign, supply, resolved”.

THE ATBARA clasp: To those troops who took part in the battle at Atbara on the 8th April, 1898, fought against the Dervish Army commanded by Emir Mahmoud

KHARTOUM clasp: To those troops who took part in the battle of Omdurman and entry into near Khartoum on 2nd September, 1898

SUDAN 1899 clasp: To those troops who served on the Blue and White Niles south of Khartoum during 1899.

Condition NEF. Sold with a fine original 21 x 21.5cm portrait photograph of Blewitt in Rifle Brigade uniform by Russell & Sons of Southsea. Also research, including a photocopy of 3 page biography of Blewitt written by General Sir Edward Hutton for the Rifle Brigade Chronicle and Gazettes, promotions and other research (the latter on CD).

An extremely fine group to one of ‘Kitchener's men’ who had an extremely active service in the Sudan Campaigns and as Governor. Plenty of scope for much more detailed research.