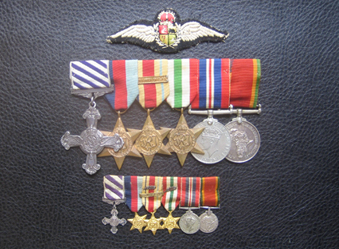 "Captain Hugh Errol Noel Wildsmith (P. 47885), South African Air Force, No. 2 (S.A.A.F.) Squadron. This officer has participated in a large number of Sorties, including numerous fighter escorts and sweeps. On one occasion in July 1942, during an escort flight, his squadron engaged a formation of enemy bombers and destroyed 4 of them. Throughout the engagement, Captain Wildsmith displayed great courage and initiative. In October 1942, his squadron was detailed to escort a bomber force well into enemy territory. Whilst over the target area, Captain Wildsmith became separated from the formation and his aircraft was attacked by 10 enemy fighters. Displaying great skill, he destroyed one of the attackers and frustrated the efforts of the others until he was able to re-join his formation. This officer has invariably displayed outstanding leadership and high courage. He has destroyed at least 3 enemy aircraft.”

Hugh Errol Noel ‘Wildy’ Wildsmith was born on 23 November 1916 in Cape Town and enlisted for service in the South African Air Force on 9 December 1939. Selected for pilot training, he was Commissioned T/2nd Lieutenant Flying Officer on 2 April 1940 and served as an Instructor, being promoted T/Lieutenant on 2 December 1940. Posted to 4 Squadron S.A.A.F. (Hawker Fury’s) in Kenya on 28 April 1941, he served with this Squadron until 30 June 1941, being posted to 41 Squadron S.A.A.F. (P-36 Mohawk’s) in Abyssinia just over two weeks later. Soon after switching to 3 Squadron S.A.A.F. (P-36 Mohawk’s), he was posted back to South Africa on 22 December 1941. Promoted T/Captain on 19 February 1942, on 13 April, Wildsmith departed for service in the Western Desert and was initially posted to S.A.A.F. Base Depot and trained on Curtis P-40 Tomahawk’s, where he was assessed as an above average fighter pilot. On 3 June 1942, he was posted to 2 Squadron S.A.A.F. (The flying Cheetahs) who had recently been reequipped with Curtis P-40 Kittyhawk’s………………….

Note: The medals come with a photocopy of Major Wildsmith’s original no.2 log book, the original of which is held in the South African Air Force Museum at Swartkorps in Pretoria. The log book includes a large amount of most interesting and useful entries. However it has various ‘added’ entries and notes which increase his victory tally to 9 aircraft destroyed, 4 probably destroyed and 1 damaged. These ‘added’ entries are clearly in a different hand and have clearly been added to increase the desirability of this already outstanding group. The original logbook held in Pretoria has not been checked but is assumed the logbook was photocopied, the new entries added and the photocopied logbook photocopied again to appear like these entries were as added by Wildsmith. Luckly whoever added the entries has handwriting nothing like Wildsmith’s!. Wildsmith is correctly and officially recorded with 4 confirmed victories, 1probably destroyed and 1 damaged, the entry for each of these confirmed in his logbook and also in Squadron and Official records which also come with the group.

Condition generally VF or better. Medals and Wings come with a substantial amount of copy research, including a photocopy of Wildsmith’s pilot no 2 logbook, which details flights from April 1942 until November 1944. Also his full Service File with other papers. Additionally the following digital files (can be emailed or added to CD). This includes 2 Squadron S.A.A.F. War Diary 1942-3, 7 Wing War Diary 1942-3, M.C. LG, Wildsmith’s Combat Reports and a large selection of photos of 2 Squadron’s pilots, Kittyhawks and Wildsmith in North Africa.