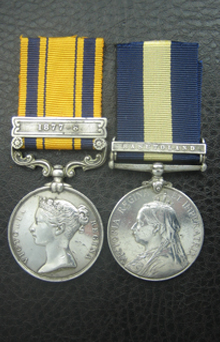 Death notice lists Ernst Ludwig Friedrich Peter, generally known as Friedrch Peter was born in Germany circa 1859. His occupation noted as a farmer, he died on 22 June 1906 in Keiskama Hoek, aged 47. During the Keiskama Hoek Volunteer Mounted Corps during the during the Gaika and Galekas campaign of 1877-8 and the Basutoland campaign of 1880-1.

The corps consisted of cavalry and infantry. Strength varied from 4 officers and 52 men in August, 1877, to 4 and 78 in January and February, 1878, dropping to 2 and 34 in June, 1880. The commanding officer was Capt. G. A. Nettleton although the return for June, 1878, gives Lt. G. Frauenstein in this post. The corps went on active service on 31st December, 1877, and the January return states that there were 35 horses, 3 of the officers were cavalrymen and 1 was in the infantry section. The infantry did guard duty at the Hoek and the mounted men were on patrols in the district. One man had joined the Police for three months and 5 men were serving at the front as captains and lieutenants of Fingo levies. Their names were given as M. O'Connor, D. Hood, G. Massey Hicks, W. F. Bradshaw and S. Harber and were still on that duty in April, 1878. Armed originally with long and short Sniders the corps was completely equipped with carbines in June, 1880, when it was entirely a mounted unit. A nominal roll reveals more than half those on strength as having German names. The change over to cavalry was decided on in December, 1878, and six months later swords had been added to the arms. This small unit went on to serve with the H.Q. Column in Basutoland in 1881.

Condition VF, some contact wear. A scarce pair of medals to this small cavalry unit.