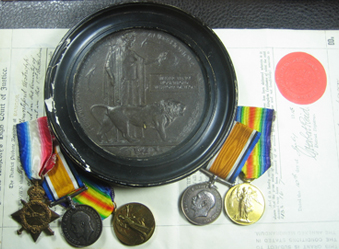 A GREAT WAR ‘BATTLE OF BELLEWAARDE RIDGE’ TRIO AND PLAQUE AWARDED TO A 22 YEAR OLD 2ND LIEUTENANT, 2ND CHESHIRE REGIMENT WHO WAS KILLED IN ACTION ON 24/5 MAY 1915 DURING THE LAST DAYS OF THE SECOND BATTLE OF YPRES AND JUST FOUR DAYS AFTER JOINING HIS BATTALION. DURING THIS BATTLE, THE ALREADY SEVERELY DEPLETED 2ND CHESHIRE’S, SUFFERED CASUALTIES OF 16 OFFICERS AND 279 OR’S. DUE TO THE HIGH LOSSES, AFTER THE BATTLE A LIEUTENANT HAD ASSUMED COMMAND OF THE BATTALION. SOLD WITH THE RECIPIENTS BROTHERS GREAT WAR PAIR

Walter Henry Mountiford Westropp was born on 2 December 1893, he was the eldest son of Francis Walter and Leticia Charlotte Westropp-Dawson (nee Gray) of Frondeg, London Road, Holyhead. He was a member of a prestigious Irish Protestant landowning family. After attending Bedford Grammer School, Walter entered Sandhurst Royal Military College on 31 January 1912. Records show that although he had completed his course he failed to achieve the necessary academic level and therefore was not offered a regimental commission. His MIC notes that he initially volunteered to serve in the Ranks of the Cheshire Regiment on 25 November 1913 and had attained the rank of Corporal by the start of the Great War. Granted a commission on 5 March 1915.

2nd Lieutenant Dawson joined the 2nd Battalion, Cheshire Regiment, in France from 20 May 1915 (War Diary confirms arrival). However, just four days later he was killed in action on the evening of 24/25 May at the Battle of Bellewaarde Ridge (Hooge), during the last days of the Second Battle of Ypres. At the time the 2nd Battalion, Cheshire Regiment, formed part of the 84th Brigade of the 28th Division and had suffered over 400 casualties on 8 May at Ypres. Severally depleted in numbers, the Cheshire’s had been formed into a composite Battalion with other battalions short in numbers. By 23 May several drafts of recruits had arrived and the battalion was able to reform, however most of these new recruits were extremely inexperienced.

On the 24 May, at commencement of the Battle of Bellewaarde, the Germans released a gas attack on a 4.5 mile front. The Divisions that faced the brunt of this suffered badly and called upon the reserve troops of the 28th Division. 84th Brigade, including the 2nd Cheshire’s, were ordered to counter-attack the German lines but they were driven back with heavy losses. 6 officers were killed and 10 injured and there were 279 casualties amongst the other ranks. The battle ended on 25 May 1915 with both sides having reached a state of exhaustion and debilitating losses. 22 year old, 2nd Lieutenant Westropp- Dawson was one of the six officers killed. So high were the number of Officers lost that the War Diary for 25 May records that after the battle, the battalion was under command of a Lieutenant.

24 May “Battalion called out (Captain G. R. Barton having assumed Command) and proceeded to Ypres following lines of railway south of town and thence into trenches in Square I 10 from which an attack was made on enemy trenches about midnight. Battalion was subjected to a withering fire in the morning whilst advancing over open ground.” 25 May “Battalion relieved and returned to BRANDHOEK Brigade having been relieved by 5th Cavalry Brigade”

The Battle of Bellewaarde Ridge from the CWGC website:

“At 2.45am on 24 May (Whit Monday), a ferocious German artillery bombardment slammed down on British V Corps front. The clamour of shells, machine-guns and rifle fire was accompanied by a simultaneous discharge of chlorine gas on almost the entire length of the British line. German infantry assaulted in its wake. Although the favourable wind had alerted the British trench garrison to the likelihood of a gas attack the proximity of the opposing trenches and speed of the enemy assault meant many defenders failed to don their respirators quickly enough and large numbers were overcome. But the British defence rallied and the attackers were repelled by small arms fire – except in the north, where Mouse Trap Farm was immediately overrun, and in the south where (by 10am) German infantry broke into the British line north and south of Bellewaarde Lake. The centre of the line between these gaps held fast all day.

Heroic efforts were made to retrieve the situation at Mouse Trap Farm before it was decided, that evening, to withdraw to a more defensible line. The German break-in around Bellewaarde Lake prompted the commitment of Corps reserve troops – but their arrival took time and the depleted front line battalions had to wait until the early evening before the weakened 84th Brigade was able to attack and turn the enemy out of Witte Poort Farm. Following the belated arrival of 80th Brigade a joint night counter-attack was made after 11pm; this assault, in bright moonlight, was a disaster and both 84th and 80th Brigades suffered heavy casualties. In the early hours of the morning the battle quietened. The following day saw a reduction in shelling and no attempts by the Germans to renew the offensive.

Although he has no known grave, 2nd Lieutenant Dawson is commemorated on the Ypres (Menin Gate) Memorial, Panel 19-22 and at St Seiriol's Graveyard, Holyhead.

Walter’s father's family originated from Charlesfort, County Wexford, Ireland where he was a magistrate for the County. He was High Sherriff in 1899 and also High Sheriff for County Carlow in 1911. Previous to that he served as Lieutenant in the 4th Battalion, East Surrey Regiment and Captain in the 3rd Royal Irish Regiment, Wexford Militia. Walters brother, Robert Gray Westropp Dawson, who’s medal pair form part of this group, served as a Private in the Army Service Corps during the Great War. He survived the War.

Condition; generally NEF. Plaque contained in contemporary glazed plaster oval frame (some damage.) Sold with an original probate document relating to the death of 2nd Lieutenant Dawson; two modern name plaques for both brothers and a quantity of research, including both military and family research and digital copies of the battalion War Diary for May 1915.