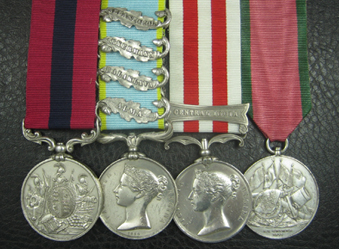 THE OUTSTANDING CRIMEAN WAR ‘CHARGE OF THE LIGHT BRIGADE’ D.C.M. MEDALS AND ORIGINAL DOCUMENTS GROUP AWARDED TO A TROOP SERGEANTMAJOR, 8TH ROYAL IRISH HUSSARS WHO WAS SEVERELY WOUNDED AT BALAKLAVA’, HIS D.C.M. BEING AN EXTREMELY RARE CONFIRMED AWARD FOR THE CHARGE, WITH ONLY AROUND 20% OF THOSE AWARDED BEING CONFIRMED FOR THE BATTLE. SERVING THOUGHT THE CRIMEAN WAR; HE WAS NO LESS THAN THREE TIMES INCLUDED IN IMAGES BY THE FAMED CRIMEAN WAR PHOTOGRAPHER ROGER FENTON. GRANTED A COMMISSION IN THE 8TH HUSSARS IN 1857 AND WAS PRESENT AS STAFF OFFICER LEFT WING AND ADJUTANT THROUGHOUT THE CENTRAL INDIAN CAMPAIGN DURING THE MUTINY, ENDING HIS DAYS IN DUBLIN AS CAPTAIN AND PAYMASTER, 18TH ROYAL IRISH REGIMENT

Michael Clarke was born on 4 March 1818 at Bohola, Castlebar, Ireland and enlisted in the 8th Hussars at Hounslow, London on 2 January 1836, giving his age as 18 years. Advanced to Sergeant in 1849 and to Troop Sergeant-Major in March 1854, the following month he embarked for the Crimea in the H.T. Shooting Star, arriving in September. He was subsequently present at the battles of Bulganak and Alma, before participating in the Charge of the Light Brigade at Balaklava.

The 8th Hussars during the Charge of the Light Brigade at Balaklava:

“The 8th formed the right of the second wave of the brigade attack. Less one troop which remained as escort to Lord Raglan this time under the command of Captain Paymaster Henry Duberly, the 8th went in with 115 officers and men making it the smallest of the brigade’s regiments…………

SEE PDF FOR DETAILED WRITE UP

Sold with the following original documents, including some rare pieces, all in superb condition:

1) Clarke’s Statement of Services with hand written entries up to the time of his transfer to the 59th Foot in 1867
2) A most interesting booklet of testimonials printed circa 1872 containing references about Clarke submitted in 1867 from seven senior officers of the 8th Hussars and a record of service
3) Eight original Commissions documenting his progression from Cornet of the 8th Regiment of Light Dragoons in 1857 through to Paymaster of the Army Pay Department in 1878. With two original O.H.M.S. sent envelopes
4) A photographic image of the Clarke in uniform wearing his medals.

A LIGHT BRIGADE D.C.M. OR NOT

Clarke’s original Statement of Services confirms that his Distinguished Conduct Medal was awarded ‘distinguished conduct in the field at Balaklava’. This latter entry is critical, for it confirms that his gallant deed/s were performed during the charge of the Light Brigade. Confirmation of why and when an award was made is a major issue with D.C.M.s to Light Brigade Regiments because each Regiment received eight such awards but not all were for Balaclava; some were for other battles, minor engagements or for general outstanding service. Of the forty D.C.M.’s issued to Light Brigade Regiments, just over two thirds were to confirmed chargers and each of these awards has the potential to have been awarded for the famed charge and most likely were. However, of these only eight (including Clarke’s) are supported by some evidence that the award was indeed for the Balaclava. As such medals to these eight are more highly prized.

As noted Clarke’s Crimea Medal and D.C.M. are both official replacements named to him as a Lieutenant, his rank in 1861. Given the replacement date and that the Mutiny medal is the original issue, it is likely that the originals were lost during the Indian Mutiny. One beneficial consequence of this is that the Crimea medal is officially impressed, whereas is original would have been issued unnamed. It is interesting to note that the loss of medals during the Mutiny was a not uncommon issue, so much so that the government in India sanctioned the reissue of medals gratis, to Officers and men who had lost theirs. TheTurkish Crimea medals did not start being issued until 1860, though their was a great shortfall in numbers and many were manufactured by British companies. As such, this is almost certainly Clarke’s original piece.