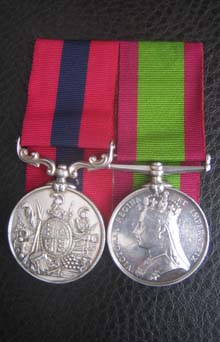 A RARE AFGHANISTAN 1878-80 D.C.M. PAIR FOR THE DISASTROUS SORTIE TO AND FIGHTING RETREAT FROM DEH-KHOJA ON 16TH AUGUST 1880

DCM recommendation, submitted to the Queen on 5 March 1881(WO146/1/35), list Hallett, along with three other soldiers of the 2/7th and one Royal Artilleryman;

‘That a Silver medal for Distinguished Conduct in the Field be granted, without annuity or gratuity to each of the following soldiers in recognition of their gallant conduct on the occasion of the sortie from Kandahar on 16th of August last’

On 16th August 1880, four companies of the 2/7th (367 men), along with companies from the 19th and 28th Native Infantry, formed part of a force of 900 infantry and 300 cavalry, sent on a sortie to attack the nearby fortified village of Deh Khoja. The plan which had originally been intended to involve a much larger force was foolishly stripped down in size by Brigadier-General Brooke and he would lead the attack. After suffering heavy casualties, the force finally reached the village, which was made up of a warren of streets and houses, perfect for defence. In the fierce hand to hand fighting that followed and with enemy reinforcements streaming into the fight, retreat became the only option. Brooke himself was was killed, as were many of his senior officers and;

‘The combat during the retreat was perhaps even more desperate than during our assault. These desperate Ghazis and bold mountaineers, ignorant of discipline or any regular art of war, and armed only with rude matchlocks, short swords, and axes of native manufacture, had by a sort of natural instinct discovered at once our weak points, and, by feints upon our centre, and furious assaults upon our flanks during the whole of our retreat across the plain, not only inflicted a tremendous loss upon us, but at one period seriously endangered our position.’

Both sides suffered heavy casualties, with the British losing 226 officers and men but it was another major disaster for the British and just 3 weeks after Maiwand.

Private Hallett was Awarded one of Seven D.C.M.s and one VC awarded to the Regiment for the Second Afghan War 1878-80, all of which were for Deh-Khoja. Hallett’s being amount the initial recommendations on 5th March 1881, the other three were not submitted until 8th August 1881. Most of these recommendations appear to be for bringing wounded men in under fire or holding off the enemy during the retreat.