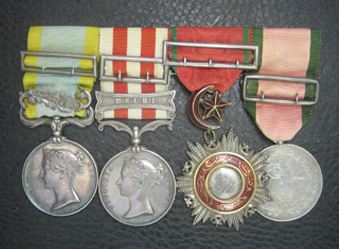 THE OUTSTANDING CRIMEA & INDIAN MUNINY GROUP TO AN OFFICER OF THE 10TH HUSSARS WHO SERVED AS ADC TO GENERAL SCARLETT DURING THE CRIMEAN WAR. TRANSFERRING TO THE 6TH DRAGOON GUARDS (CARABINIERS) HE WAS AT MEERUT WHEN THE INDIAN MUTINY ERUPTED THERE ON 10 MAY 1857 & TOOK PART IN THE OPERATIONS BEFORE & SIEGE OF DELHI AS ADC TO SIR HOPE GRANT. HE WAS VERY SEVERELY WOUNDED BY A BULLET TO THE HEAD AT THE ASSAULT ON 14 SEPTEMBER 1857, SO SEVERELY HE WAS LISTED AMONG THOSE KILLED IN THE LONDON GAZETTE. HIS ACTIVE SERVICE OVER HE WAS APPOINTED TO SANDHURST AS CAPTAIN OF THE C COMPANY OF GENTLEMAN CADETS BUT DIED OF HIS WOUNDS IN 1868 AT JUST 44 YEARS OF AGE. HE HAD PREVIOUSLY SERVED WITH THE 14TH LIGHT DRAGOONS IN THE CAMPAIGN IN THE SOUTHERN MAHRATTA COUNTRY IN 1844

“SANDHURST
FUNERAL OF MAJOR ROSSER. A grand military funeral took place on Tuesday afternoon on the internment of Major Charles Potts Rosser, Captain of the C Company of Gentleman Cadets, and Brevet Major of the 29th Regiment of Foot. At three o’clock the three companies of cadets, A, B and C, fell in on parade in front of the College and at once were marched to the residence of the diseased to escort the funeral cortege to the chapel and the grave. The C Company being appointed to fire over the grave, were armed with their rifles. About half past three the procession came in sight from the steps of the grand entrance of the college. The C Company separated and formed a line each side of the road., leaning on their rifles reversed. The coffin was placed on a gun carriage drawn by six black horses and ridden by three hussars as postillions. Four of his sons were chief mourners but a long trail of gentlemen followed, consisting of Lieut General Sir Dunose, A. Cameron K.C.B., the Governor, Colonel E. G. Halliwell, Commandant Colonel Lacey, Commandant of the Staff Corps and all the Officers of both colleges, the gentleman professors and a long train of friends. The procession proceeded by the band of the College playing the “Dead March” and formed a solemn and affecting spectacle. The funeral service was performed by the Rev E. J. Rogers, M.A., chaplain if the college and Rev F. M. Middleton, incumbent of York Town. Although the deceased was only 44 years of age when he died, he had seen much service; he served with the 14th Light Dragoons in the campaign in the Southern Mahratta country in 1844. Also at the siege of Sebastopol, from 17 April 1855 as Aide de Camp to Sir James Scarlett, and was present at the battle of the Tchernaya ( Medal and Clasp , 5th Class of the Medjidie , and Turkish Medal ) . Served during the Indian Mutiny, was present at the battles of Hindun on 30th and 31st May, Buddickerserai on 8th June, and throughout the siege of Dehli, till dangerously wounded whilst acting as Aide de Camp to Sir Hope Grant at the assault on 14th September 1857. Which wound received eleven years ago, was the principle cause of his death. He leaves a widow and a large family of sons and daughters to mourn his loss’”

Charles Potts Rosser was born circa 1824 and was Commissioned Cornet, 14th Light Dragoons, 8 January 1841. Serving with his Regiment in India during the campaign in the Southern Mahratta country in 1844. On 10 December 1845, he married Julia Isabella Weekes at Bombay and was advanced to Lieutenant, 3 April 1846, exchanging to the 10th Hussars at the same time. In late December 1854, the 10th Hussars were notified that they would be needed in the Crimea and shortly afterwards, Lieutenant Rosser was sent to the Crimea carry despatches regarding the Regiments readiness. His arrival was noted in the ‘Letters from Head-quarters’ by Calthorpe:

“February 3rd … Lieutenant Rosser (10th Hussars) arrived today at Headquarters from Bombay, with despatches for Lord Raglan, respecting the arrival of the 10th Hussars, who were shortly expected in Egypt from India and who are to be brought on here to reinforce the cavalry division whenever Lord Raglan may think proper”

10th Hussars disembarked in the Crimea on 17 April 1855, however in his Army List entry, Lieutenant Rosser is noted as serving as Aide de Camp to Sir James Scarlett from this date. Since Rosser himself was clearly at Headquarters, Crimea, from February 4th, its quite likely he stayed there from this date and the Army List is just giving the date the 10th arrived in the Crimea. Regardless, what is known is that whilst in the Crimea, Rosser served at the siege of Sebastopol and was present at the battle of the Tchernaya. As he was serving as ADC to Sir James Scarlett, his movements can be followed by following Scarlett’s, as well as following those of the 10th Hussars. Having been promoted Captain, 26 June 1855, Rosser was awarded the 5th Class of the Medjidie for his service in the Crimea. The History of the 10th , ‘Memoirs if the Tenth Hussars’ contains several chapters on the 10th in the Crimea (PDF copy included in research).

In 1856, the 10th Hussars was reduced from 9 to 6 troops and consequently no less than 8 Officers transferred to the 6th Dragoon Guards (6th Carabiniers), who were at that time serving in India. Rosser officially exchanged to the 6th Dragoon Guards on 15 August 1856 Of the 8 Officers who transferred, 2 would be killed in the great mutiny and 1 (Captain Rosser) was severely wounded.

The 6th Dragoon Guards, was one of small number of British units stationed in the garrison town of Meerut at the outbreak of the Indian Mutiny, which ignited at Meerut on 10 May 1857. Consequently, the 6th Dragoon Guards were immediately involved in the conflict, though initially the British it seems were slow to react, or at least taken by surprise by events. The events that followed have been put together in an excellent article by fellow dealer, Peter Duckers:

With Meerut in chaos, on the night of 10 May, the mutineers fled to Delhi, just 40 miles away, and Captain Rosser reportedly offered to take a squadron of Dragoons and a couple of guns to hunt down the mutineers before they reached Delhi, the result of which could have changed the way the mutiny itself would progress. However Rosser’s offer was not taken up and for years afterwards was a much contested issue (see later in write up for further details) as any accusations of initial indecision did not look good on some of the commanders records.

As the mutiny progressed Captain Rosser took part in the various operations around Dehli and was present at the battles of Hindun on 30th and 31st May, Buddickerserai on 8th June, 1857. Rosser was shortly after appointed Aide de Camp to Sir Hope Grant, Cavalry Brigadier of the Delhi Field Force and served throughout the siege of Dehli itself. He was present at the assault of Delhi on 14 September 1857, during which he was very severely wounded. From the private Journals of Sir Hope Grant:

“.. Captain Rosser, my acting aide-de-camp, was hurled senseless to the ground by a shot which lodged in his head; eventually partially recovered (Major Rosser, however, ultimately died of his wounds in 1869)”

A History of the Sepoy War in India:

“Rosser of the Carabiniers, who had been so eager to carry to Dehli the first tidings of revolt in Meerut, and who was now acting as Hope Grant’s aide-de-camp, fell with a bullet in the forehead, which all regarded as his death wound”

So severe was Captain Rosser’s wound that he was mistakenly reported as killed. The London Gazette (among others), 6 May 1858 even publishing his name as one of those killed at Dehli!

A brief description of the 6th Carabiniers service at Meerut and the Delhi operations can be found in ‘British Regiments at the Front’ by Hodder:

“…But it was during the time of the Indian Mutiny that they performed feats of valour for which we British men, as well as the women, owe them heartfelt gratitude. They were among the reinforcements sent out to stay the terrible tide of massacre and rapine. How they struggled for life and empire at Delhi; repulsed the rebels outside Lucknow with fearful carnage, with loss of their leader; and, finally, when Lucknow had fallen, pursued the rebels with relentless wrath, dealing vengeance with a heavy hand—all this has been written by many pens. It has been the theme to make the driest book most vivid reading. It was the story of stern, ruthless punishment and revenge for the horrible crimes committed by the then unregenerate Sepoy against helpless women and children—crimes of torture, murder, wholesale massacre, and unconceivable outrage….

When, at Meerut, on that never-to-be-forgotten Sunday, they pursued the fiends responsible for that awful massacre, the Carabiniers, together with the 60th Rifles drew a very determined line between righteous revenge and feeble long-sufferance; between just wrath, that ever-potential factor in heroic blood: primitive wrath, and its cognate barbarity of act. "Remember the women! Remember the babies!" ran through the ranks on that occasion; and, with one heart and mind, the Carabiniers and the 60th, an avenging host, pursued the rebels, and cut them to pieces, right up to the very gates of Delhi, imprecating as they slew. And well they might be forgiven for that. Never were the lives of the innocent and defenceless so quickly, terribly, yet justly avenged; never has a more awful nemesis from human hands fallen upon the destroyers of women and women's honour. And, remembering all this, we defend it and uphold it, for we know full well that, in this present war, the barbarities and atrocities committed by an unprincipled enemy must again meet with this righteous kind of vengeance. And, if it is the traditional and special aspiration of the Carabiniers of to-day to cry "Remember Louvain! Remember the women and babies of Belgium!" shall we say "Hold and spare!" No! shall we say, "Vengeance is God's: God will repay!" Yes, with all our heart and soul; and what better agency for repayment than that of our noble Carabiniers! They are not of the kind to repay barbarity with barbarity; but they are of the kind to use their swords with singular effect, and like English gentlemen, whose special office it is to wreak proper vengeance to-day as in the past on the destroyers of women and children.

At Gungaree the Carabiniers lost three of their officers, but for this they took a heavy toll. Meeting the rebels three days later, they defeated them completely, taking their leaders prisoners. Again the terrible work began. Hotly they pursued the flying rebels, and put them to the sword without a show of quarter. Rebel blood flowed like water for the rebel deeds they had committed against right and honour. “ For his services during the Mutiny, Captain Rosser was promoted Brevet Major on 19 January 1858 but his wounds prevented further active service. He exchange to 29th Foot, 18 March 1862 and was appointed to Sandhurst on 4 November 1864 as Captain of the C Company of Gentleman Cadets. Still suffering from the effects of his wounds, Major Rosser died due to them at Sandhurst on 10 November 1868. He was just 44 years of age. One of his sons was named Willoughby Scarlett Rosser after his old General.

A quite stunning and important group of medals.