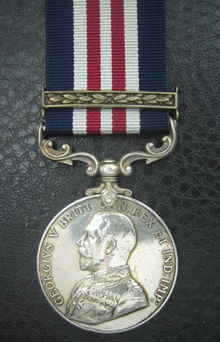 Lance Corporal Robert Tippen, 2nd Battalion Gordon Highlanders, from Newmilns, East Ayrshire, Scotland, entered the French theatre of War on 7 October 1914. Listed among the wounded for 26 November 1914, he is also listed as being treated in Falkirk infirmary (details of wound not noted) on 17 March 1917. Having returned to duty, he was awarded the Military Medal for gallantry in October 1917, being listed in the Battalion War diary for awards for that month. During October 1917, the 2nd Battalion Gordon Highlanders were involved in the battle of Passchendaele, in particular at Nordemdhock Ridge, where they took part in a bold assault under artillery fire. At the end of the month they were in action again at Gheluvelt, further south on the Menin Road, where they were forced to abandon their objective through loss of men. By the end of October they had lost a devastating 660 killed and wounded. Given the Gazette date, it is believed the Bar to the M.M. was for Passchendaele also. Promoted Sergeant, Tippen later transferred to the 1st Battalion, Regimental number 2865093.

Sergeant Tippen was presented with his MM and Bar by Lt Colonel Forbes at King Street Barracks on 14 September 1918, a photograph of Tippen having his award pinned to his breast is featured in ‘Aberdeen in the Great War’ by Derek Tait.