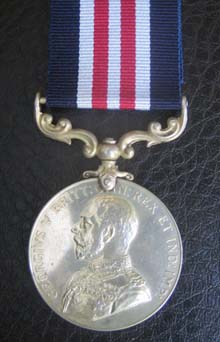 WW1 AUSTRALIAN 1918 BATTLE OF ALBERT M.M. TO AN NCO 4TH BATTALION AIF, FOR GALLANTRY WHEN HE SILENCED AN ENEMY MACHINE-GUN POST WITH HIS LEWIS GUN AT CHUIGNES, 23 AUGUST 1918. LATER WOUNDED IN ACTION 22 SEPTEMBER 1918

‘At Chuignes on the 23rd August 1918, when the leading Company was held up by strong machine gun fire, L/Cpl. Hands without waiting for orders rushed his Lewis gun forward and engaged an enemy post from an enfilade position silencing the gun and thereby materially assisting the advance. He handled his section with great coolness and determination throughout the operation.’

Hands was awarded his M.M. for gallantry in operations on the Somme, in particular during the advance on Chuignes in August 1918. During the latter action the Battalion captured 6 field guns, 64 machine guns and 450 prisoners, whilst suffering casualties of one officer and 20 other ranks killed or died of wounds. 4th Infantry battalion, along with 1st, 2nd, 3rd and 7th were awarded the battle honour Albert (Chuignes ) for their achievement in capturing the ridge of Chuignes on the south side of the River Somme 21st – 23rd August 1918, as part of the Allied counter-offensive known officially as the Second Battle of Albert.

Norman James Hands, an 18 year old farmer from Sydney, New South Wales, enlisted in the Australian Imperial Force, 3 April 1916, and was posted to join the 1st Cyclist Corps. He had seen 2 years previous service as a Cadet. Hands embarked for Egypt in SS Clan McGillivray, and disembarked there 13 June 1916. He then travelled to the UK in August 1916, before transferring to the 4th Australian Infantry Battalion the following month. He served with the Battalion as part of the 1st Australian Brigade, 1st Australian Division in the French theatre of war from September 1916.

In May 1917 he was admitted to hospital with trench fever, rejoining the battalion in January 1918. He was appointed Lance Corporal in April 1918 and received a gunshot wound to the back, 22 September 1918, and was invalided to the UK five days later. He returned to Australia in H.T. Ceramic, and was discharged 9 May 1919.

During his service, Lance Corporal Hands was in trouble a number of times for neglecting to carry out orders, going AWOL resulting in numerous forfeiting of pay, periods of confinement and field punishment etc. On the main these offenses seem to have been committed while the battalion was not in the Field.

124 MM’s awarded to this battalion during the War.