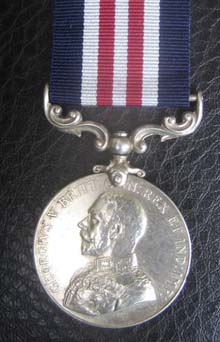 A WW1 1918 ‘SOMME’ M.M. TO A PRIVATE IN 55TH AUSTRALIAN INFANTRY BATTALION, WHO ORIGINALLY SERVED IN THE 6TH LIGHT HORSE, SERVED WITH THE ARTILLERY IN EGYPT AND HAD FURTHER SERVICE WITH 56 BATTALION 1937- 1944

‘For conspicuous gallantry and devotion to duty during an attack on the Hindenberg Line, north of Bellicourt on 30th September and 1st October 1918. While the enemy shelling and machine-gun fire was at its utmost violence Pte. Street carried most important messages between the firing line and Battalion HQ. In the accomplishment of these tasks this runner had to move across an area which was subject to the enemy's shellfire and for the distance of some hundreds of yards to direct machine-gun fire and sniping. Throughout this gallant soldier showed great determination and most unselfish disregard for his own personal safety.’

Edmund Harrington Street, an 18 year old Station Hand from Harrington, New South Wales, enlisted in the Australian Imperial Force, 3 August 1915, having previously served as a Senior Cadet. Street was initially posted to the 6th Light Horse, and then the 2nd Reserve Light Horse Regiment at Maadi, one of the AIF training camps in Egypt, on 1st March 1916.

On 1st April 1916, he transferred as a Gunner to 15th Field Artillery Brigade, serving with unit in Egypt until it Embarked to Europe to join the BEF in August 1916. On 8th of February 1917, Street transferred yet again, this time to the 55th Australian Infantry and would serve with this battalion for the duration of the war.

Street returned to Australia, and was discharged 18 July 1919 and became a school teacher. However in May 1937, Street enlisted in the Army again, being posted to Reserve list, 56 Battalion. He was soon after posted corporal, Sergeant in 1939, Quartermaster Sergeant in 1940 and transferred to the Active list 56 Battalion on 2nd September 1941. He was finally discharged, aged 46, on 21st January 1944 on compassionate grounds (family). His discharge notes he resided in Bondi, Sydney.

The portrait photo of Street is held in the AWM collection:

Condition VF. Sold with copy service papers on CD. A replacement M.M. was issued in March 1952, however this medal will be the original issue as it isn’t marked ‘Duplicate’, ‘Replacement’ or similar.