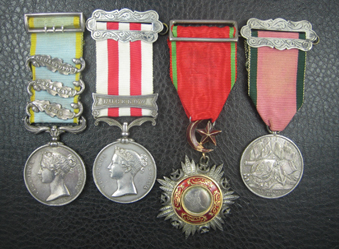 AN IMPORTANT CRIMEA AND INDIAN MUTINY GROUP OF FOUR AWARDED TO A MAJOR 42ND ROYAL HIGHLANDERS, MUCH OF WHOSE ‘ACTIVE SERVICE CORRESPONDENCE’ SURVIVES IN THE REGIMENTAL MUSEUM: IT WAS HE WHO SUPPORTED THE MORTALLY WOUNDED BRIGADIER ADRIAN HOPE IN HIS ARMS DURING THE DISASTROUS ATTACK AGAINST FORT ROOYAH IN APRIL 1858, A SELFLESS ACT THAT NEARLY RESULTED IN HIS OWN DEMISE, WITH BOTH HIS BONNET AND KILT BEING SHOT THROUGH

Joseph Charles Ross Grove was commissioned into the Black Watch as an Ensign in September 1851, and was advanced to Lieutenant in May 1854. As verified by relevant sources, and his own surviving correspondence, he served throughout the Eastern Campaign of 1854-55, and participated in the Kertch and Yenikale expeditions, in addition to the battles of Alma and Balaklava. The following account, taken from a letter home, describes his experiences at Alma on 20 September 1854:

‘Meanwhile, the First Division (our own), deployed on our side of the river and were ordered to lie down to avoid the shell and shot which came like hail amongst us. Many of us had narrow escapes but only three men were knocked over then. In half an hour after we deployed we got the order to advance. We crossed the river and got into a vineyard. The whistling of the bullets was perfectly astonishing. The thickness of the foliage, the river, half a dozen dykes to cross and five or six houses broke us completely. I am now speaking of my cause. We formed line as quickly as possible under a most fearful fire of shot, shell, grape and canister, and musketry. How we escaped I know not. Immediately we got into order we opened fire and continued advancing up a tremendous steep brae so rapidly that their artillery could not get our range……………………….

Ross Grove, whose gallant deeds remained unrecognized, went on to see further action at Bareilly and in the Oude, and reverted to half-pay in June 1864. He was finally placed on the Retired List as a Major on 16 October 1866. Interestingly Ross Grove anonymously authored a three volume novel entitled ‘Amat’ published in 1881(copy included on CD), which has much to do with the Indian Mutiny and Ross Grove certainly seems to have used his own experiences as a basis to parts. Of particular note being the assault on Fort Rooyah.

He died at Lyndhurst, Hampshire in May 1889, aged 54 years, having dropped the Grove part of his surname. His Estate passed to his spinster daughter, Miss Ethel Margaret Ross, and on her death in February 1917, her Will stipulated that her late father’s correspondence from the Crimea War be bequeathed to his regiment, the Black Watch. Containing a series of vivid and fascinating observations pertinent to numerous engagements in the Crimea, the whole correspondence constitutes an important and exceedingly rare record of a bloody conflict seen through the eyes of a young - and very gallant - Infantry Officer.