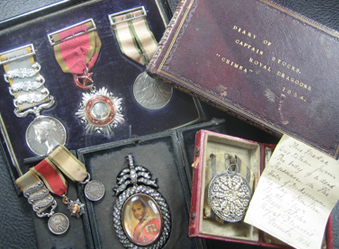 3) A fine portrait miniature of Major Stocks in uniform wearing the medals, probably from an over painted photograph, which was common practice at this time. Portrait mounted in a within a rosecut diamond and gold frame with gilt back. Glazed reverse with the enamelled wording ‘MICHAEL STOCKS ROYAL DRAGOONS 1861’. This in its original fitted case. Brooch measures 4.75cm x 8.5cm and weighs 52.82g, so quite weighty. An extremely attractive piece.

4) A Russian medal with ribbon picked up after the battle of Inkermann, with old note; 'THIS MEDAL WAS TAKEN FROM THE BODY OF A DEAD RUSSIAN ON THE FIELD OF INKERMAN THE DAY AFTER THE BATTLE, BY MAJOR STOCKS, ROYAL DRAGOONS, CRIMEA 1854'. Contained in old leather box.

5) A most attractive little diary measuring 18 x 10.5 cm and bound in Morocco leather. To the front cover ‘DIARY OF CAPTAIN STOCKS, ROYAL DRAGOONS “CRIMEA” 1854 is impressed in gold letters. It contains 118 pages up until 22 May 1855. Stocks then tells how this 1st part of his diary had been sent home and he may as well start another. This he did, this new diary being slightly smaller and running over another 88 pages up until 19 October 1855. This smaller diary has been bound together with the first, so together we have in the region of 206 fully filled pages of hand written entries, in small writing, with easily enough content for a book to be written on Stocks experiences and observations of the Crimean War.

Michael Stocks was Commissioned Cornet, 1st Royal Dragoons on 11 December 1846. Advanced to Lieutenant, 21 July 1849 and Captain on 25 February 1853. Promoted Major on 23 October 1857, he retired by sale of his Commission on 16 October 1860. He served abroad in Turkey and the Crimea between May 1854 and June 1856, the rest of his service being at home. He served during the Eastern campaign of 1854-55, including the battles of Balaclava, Inkerman and Tchernaya and siege of Sebastopol. His awards consisted of the British Crimea medal with 3 clasps, Turkish Crimea medal and 5th Class Order of Medjidie, the latter being one of three such awards to men from his Regiment. Major Stocks died at Latheronwheel, Caithness on 30 September 1895, his obituary in the Glasgow Herald noting he was the only senior Officer of his Regiment not wounded at the battle of Balaclava.

THE HEAVY BRIGADE AND THE BATTLE OF BALACLAVA

Captain Stocks was present with his Regiment on 25th October 1854 at the battle of Balaclava, taking part in the famous charge of the Heavy Brigade as one of the Troop commanders……………….

SEE PDF FOR EXTENSIVE WRITE UP

A quite outstanding and rare artefacts belonging to an officer who took part in one of the most famous battles in history, his diary in particular being of great historical importance.

Provenance, medals new to the market in June 2022, having recently been consigned for sale by the family, Wood Hall, Hilgay, Norfolk. Also sold by the family were the Crimea group awarded to Colonel Sir Richard George Ellison C.V.O. and QSA pair to Captain George Paget Ellison, 9th Lancers. Copy catalogue pages with research.