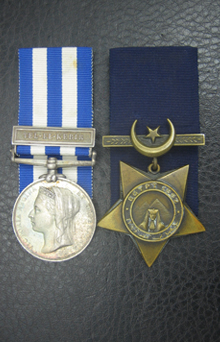 AN EGYPT 1882 TO A CAPTAIN AND COMPANY COMMANDER, ROYAL IRISH FUSILIERS WHO TOOK PART IN THE FIERCE HAND TO HAND FIGHTING AT THE BATTLE OF TEL-EL-KEBIR WHERE HIS REGIMENT SUFFERED SOME AMONG THE HIGHEST NUMBER OF CASUALTIES OF THE REGIMENTS PRESENT

Charles Wilberforce Wildman was born on 27 June 1843 and was appointed Ensign in the Royal Irish Fusiliers on 22 May 1866. Appointed Lieutenant, 5 February 1868 and Captain, 14 September 1875, Major Wildman served with the 1st Battalion Royal Irish Fusiliers in the Egyptian War of 1882, and was present at the battle of Tel-el-Kebir.

A very good description of the Fusiliers part in the battle, can be found on the Regimental website and includes and account by one of the Officers who describes the fierce hand to hand combat the Fusiliers were involved in:

“Lieutenant Wilbraham of B company describes the attack: 'I saw men dropping here and there, and I never expected to get 50 yards farther, but I did not show it, and although the pebbles were flying about one's ears, every 50 yards gave one greater confidence. So we advanced towards the long continuous blaze on the parapets without firing a shot; indeed, we saw no one to shoot at, the day getting gradually lighter, and at about 500 yards from the works I began to make out some heads with my glasses ... . We went on slowly to within 200 yards or less, when I could see the heads on the parapets plainly, and choosing my spot I took a rifle from a man and stood still while I took about eight steady shots at the crest ... . I jumped the ditch and dropping off the parapet went clean over the heads of two men who were cowering behind it ... . I went straight on. I shot two fellows with my revolver and knocked another's rifle out of his hand with my sword ... and was in pursuit of another, when about six yards off he turned and proceeded to stuff a cartridge into his rifle. I knew my only chance was to go for him straight, and I just managed to hit his muzzle with my sword. I think I must have knocked the cartridge out of his hand for he clubbed his rifle and hit at me. At the same moment I tripped over my scabbard, and he just caught me on the tip of the shoulder as I fell right at his feet. I was too pumped to save myself and thought I was done for, but just as he was going to hit me again, a man named Kelly, the right hand man of my company, drove his bayonet clean through him, much to my relief.'

A transcript of the report on the battle of Tel-El-Kebir can be found here:

At the battle, the Royal Irish Fusiliers suffered 39 killed, wounded and missing, with only the Regiments in the Highland Brigade and the RMLI suffering more.