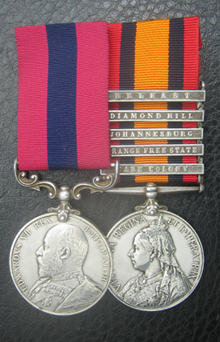 A VERY FINE BOER WAR ‘BLACK WEEK’ 6TH (INNISKILLING) DRAGOONS D.C.M. AND M.I.D. PAIR FOR GALLANTLY ATTEMPTING TO SAVE THE LIFE OF HIS MORTALLY WOUNDED CAPTAIN BY CARRYING HIM TO SAFETY AMIDST A HAIL OF BULLETS NEAR RENSBURG ON 16 DECEMBER 1899

D.C.M. London Gazette 27 September 1901, recommendation from With the Inniskilling Dragoons:
“Late in the afternoon on the 16 December 1899 a patrol, under Captain Jackson, 7th Dragoon Guards, attached to the Inniskillings, reconnoitred towards Rensburg; they came under a heavy fire, and Captain Jackson was mortally wounded. Sergeant Broadwood and Private McKinnon gallantly stuck to him, amidst a hail of bullets, and successfully carried him in.”

David McKinnon was born at Dungannon, County Tyrone, Ireland in 1871. He attested with the 6th (Inniskilling) Dragoons at Belfast on 1 April 1889. After five years of service during which he served in South Africa from 8 November 1889-12 November 1890 McKinnon transferred to the Army Reserve on 1 April 1896. Recalled to the Colours on 9 October 1899 to serve in the Second Boer War, entering into the conflict later that month on 23 October. Took part in the action around Rensburg in December 1899, during the 'Black Week' suffered by the British Army in their attempts to relieve Kimberly and Ladysmith between 10-17 December 1899. McKinnon survived this bloody episode, continuing to serve and receiving a 'mention' only two weeks prior to the announcement of his D.C.M. McKinnon was discharged at Curragh Camp on 4 April 1902.

6TH (INNISKILLING) DRAGOONS IN THE BOER WAR from the outstanding angloboerwar website:
“The regiment joined General French in the Colesberg district in December 1899, and took part in his operations there until he left for Modder River in the beginning of February 1900. Their work was several times mentioned in complimentary terms in General French's despatches—such as where he, referring to the seizure of a position by the 10th Hussars and Inniskillings on 4th January 1900, said, "The 6th Dragoons, led by Captain E A Herbert, showed no less dash, pursuing the enemy mounted and inflicting some loss".

One squadron under Major Allenby went to Modder River and took part in the expedition to Koodosberg Drift and also in the rush to Kimberley, being then in the 1st Cavalry Brigade (see 6th Dragoon Guards). The other two squadrons remained at Colesberg under General Clements, and with him joined the main army at Bloemfontein about the beginning of April 1900. For his good work on the way to Bloemfontein Major Allenby was mentioned in Lord Roberts' despatch of 31st March. In the northern and eastern advances the 6th Dragoons were in the 1st Cavalry Brigade, the work of which has been sketched under the 6th Dragoon Guards.

In Lord Roberts' final despatches 7 officers and 8 non-commissioned officers and men were mentioned. In the first part of 1901 a part of the Inniskillings was brought to Cape Colony and saw some fighting and much hard work there. In May 1901 and ensuing months the regiment operated in the Eastern Transvaal in a column under Colonel Pulteney, and afterwards in the north of the Orange River Colony under Colonel Rimington and other commanders.

The regiment was unfortunate in that it was often split up, and as a whole was somewhat unlucky in getting opportunities for gaining distinction; but it did much good work, and produced two of the outstanding cavalry leaders of the war, Rimington and Allenby, whose feats will long be remembered with great pride in the regiment. Two other officers gained mention in Lord Kitchener's despatches written during the war, and in the supplementary despatch 4 officers and 5 non-commissioned officers and men were mentioned.”

Later additional clasps roll notes McKinnon was also entitled to the two dated clasps. However these have been crossed out, noting entitlement to the K.S.A. medal, with another note returned 5.2.14. McKinnon had left the Army over a year earlier and although he should have also received the K.S.A. medal, this it seems was not issued/returned unissued (roll page included).

Its scarce enough to find any form of recommendation for Boer War DCM’s and this one is a particularly good one. Additionally, this is early War award for ‘black week’.