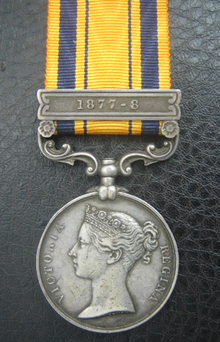 A FINE AND RARE SOUTH AFRICA 1877-9 AWARDED TO THE COMMANDING OFFICER AND KOMMANDANT OF THE QUEENSTOWN BURGHERS. APPOINTED FIELD CORNET OF THE SOMERSET DISTRICT IN 1833, HE REMARKABLY SERVED DURING THE SEVENTH, EIGHTH AND NINTH CAPE FRONTIER WARS AS KOMMANDANT OF A BURGHER FORCE DURING THE LATTER TWO

Willem Christiaan Bouwer was born in 1810 in Somerset East, Eastern Cape. He was a prominent farmer of Mapassa Leven in the Queenstown district and was appointed to the important position of Field Cornet in 1833; a position he held until into the 1880’s at least. As Field cornet of the Somerset District, he would have performed important functions in administrative, judicial and police matters in his district. He also served as Kommandant, when called on to serve during the Frontier Wars.

He took part in the Seventh Cape Frontier War 1846-7 (The War of the Axe), and as Kommandant of a Burgher force during the Seventh Cape Frontier War 1850-3 (War of Emlanjeni). He further called out on Commando duty during the Expedition against Kreli in 1857, no doubt be called out to serve in numerous other smaller disturbances requiring police or military presence.

By the time of the Ninth Cape Frontier, this battle hardened 67 year old veteran Kommandant, commanded the Queenstown Burgher Force for which he was awarded the South Africa medal and clasp.

During an 1880 Commission to Inquire into the Losses Sustained by Farmers and Other Residents Upon the Eastern Frontier of the Colony During the Late War and Rebellion of 1877-8 (digital copy included with research), Bouwer was called to make statements. During these he declares:

“Question: Were you in the Government service ?-Yes ; I was a commandant. Question: Were you paid for that service ?-Yes. Question: Did you get any prize money ?-No. I am also a field –cornet and have served Government in that capacity for the last forty –seven years. I have also served in every war since 1846. I was commandant in two wars , and have sustained heavy losses during previous wars . In 1845 I lost all I possessed.”

'I offered my services to Commandant Frost, and he kindly placed me on his Staff. We left Queenstown on the 14th. The Queenstown burghers had already gone forward under Commandant Willem Christiaan Bouwer. He was one of the pioneers of the Queenstown district and had served the country in the War of the Axe (1846), the War of Umlanjeni (1850-52), and in the expedition against Kreli and the Tembu chiefs Fadana and Qwesha in 1857 or 1858. 1880 found this fine old burgher leader still ready to take the field.'

“DIED,- At his residence, Mapassa Leven, on the 15th October, 1891, Commandant William Christian BOUWER, aged 81 years and 6 months. Deeply regretted by his numerous family and large circle of friends. The family take this opportunity of thanking Dr. BERRY, and all neighbours and friends for their sympathy during his illness and at the funeral.”

Unlike the South Africa Medal awarded for the Ninth Cape Frontier War of 1877-9, medals for the earlier campaigns were only awarded to Imperial troops, so despite his service in both the 1846-7 and 1850-3 Wars, Bouwer was not entitled to the earlier medal and this medal and clasp is his only entitlement.

Condition VF, a little contact wear, with an attractive patina.

A fine medal to an important South African soldier and extremely scarce to a man who saw service in the seventh, eighth and ninth Cape Frontier Wars, 1845-78. Plenty of research potential.