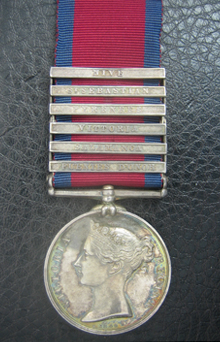 THE OUTSTANDING MILITARY GENERAL SERVICE 1793-1814, 6 CLASPS AWARDED TO GENERALMAJOR HENRY VON BRANDENSTEEN, THE HIGHLY DECORATED COMMANDER-IN-CHIEF OF THE BRUNSWICK ARMY, LATE PRUSSIAN ARMY, BRUNSWICK OELS LIGHT INFANTRY AND AN ORIGINAL MEMBER OF THE 'BLACK HORDE' WHO FOUGHT THEIR WAY THROUGH EUROPE TO JOIN THE BRITISH. HE FOUGHT IN GERMANY, THE PENINSULA AND AT WATERLOO, WAS WOUNDED ON FIVE DIFFERENT OCCASIONS; AT THE DEFENSE OF LÜBECK IN 1806, DURING THE PENINSULAR WAR AT MONASTERIO, THE STORMING OF SAN SEBASTIAN AND AT THE CROSSING OF THE BIDASSOA AND FINALLY WHILST IN COMMAND OF THE 2ND JAGER (LIGHT) BATTALION AT WATERLOO

The following from his obituary, translated from German:

'Von Brandenstein. was born 26.7.1787 in Prenzlau in the Uckermark where his father was Garrison Officer. His education differs little of which other sons of officers received during that time. He attended the schools of his fathers city and at the age of 13 years he became a Cadet on 1.3.1800 in the Prussian Infantry Regiment von Kleist (Nr.12) which was stationed in Prenzlau. This regiment had as its Colonel and CO, the Duke of Brunswik-Oels and over the next 6 years, Von Brandenstein was promoted to Ensign and then Second Lieutenant. By 1806, a year of disaster and the defeats, he took part in the campaign which ended so disastrous for Prussia. Still under the command of Duke Wilhelm von Brunswik-Oels, with his regiment , part of the Corps that was commanded by the Duke of Saxonia- Weimar-Eisenach. This Corps should have marched from Thuringia to Franken but was withdrawn hastily at the 12th October and only arrived at Arnstadt on the evening of 14th October, which prevented it from taking part at the battles of Jena and Auerstedt. At the withdrawal after the defeat, the Duke of Weimar who had taken command, met at Dambök with the troops of the Generallieutenant von Blücher and arrived with them at the city of Lübeck at the 5th November 1806. On the next day Lübeck was stormed by the French. The Brunswick regiment defended the main gate with great Zeal. The enemy columns of the division Dupont which attacked the gate first were stopped, but when 4 French brigades attacked the defending 3 battalions under Duke Friedrich Wilhelm and the Prussians couldn't withstand such an attack. From house to house, street to street they were pushed back and the biggest part of the Duke von Brunswick’s regiment was dispersed or captured. Von Brandenstein was captured, having fallen severely wounded at the left knee and became POW………

Condition EF. An outstanding Brunswick Officer’s Military General Service medal that would be had to better.