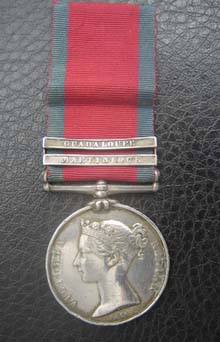 A SCARCE MGS 1793 TO A NCO OF THE ROYAL YORK RANGERS WHO WAS WOUNDED AT THE BATTLE FOR GUADALOUPE DURING WHICH HIS REGIMENT SUFFERED OVER A THIRD OF THE ARMIES CASUALTIES. AN EX ROYAL MARINE, HIS COMPANY ALSO TOOK PART IN THE NAVAL ACTION ‘OFF THE PEARL ROCK’ FOR WHICH A CLASP WAS AWARDED FOR THE NGS 1793 MEDAL

Corporal William Davies, a labourer from Walsall, Staffs, joined the Royal York Rangers in March 1808 and was discharged in April 1811. He had served previously three years in the Royal Marines but was not credited with that Service, possibly because he was under 18.

He was discharged in consequence of ‘gunshot wounds of shoulder’ at the capture of Guadeloupe on 3rd Feb 1810, presumably during the attack on the fortified French hilltop position. He had served in Captain Wright’s Company

In October 1863 he was admitted to a Chelsea in-Pension when he would have been in his mid 80’s.

It is interesting to note that in December 1808, Lieutenant Wright and men from his company were serving as marines on ships in Captain Collier’s squadron when they took part in an action off the Pearl Rock on the 12th and 13th. Lieutenant Wright and his men were praised for there gallantry during this action and a clasp to the Naval General Service medal, ‘Off the Pearl Rock 13 December 1808’ was authorised. However only 14 medals were claimed and of these none were claimed by Royal York Rangers. One can only speculate as to whether Davies, as one of Wright’s men and a former Marine, took part in this action.

At the capture of Guadeloupe in February 1810, the Royal York Rangers led the successful attack on the fortified hilltop. The attack, which ended with a bayonet charge, gained many plaudits for the Regiment but at a heavy cost. Indeed whilst the capture of Guadalupe cost the Army 4 Officers, 48 Men killed and 15 Officers, 243 Men wounded, the Royal York Rangers alone lost 4 Officers, 27 men killed and 5 Officers, 82 Men wounded! ………………

SEE PDF FOR LARGER WRITE UP

A scarce casualty medal to a scarce regiment, only 49 medals to the regiment, 35 with both clasps. Sold with copy papers, gazettes etc on CD.