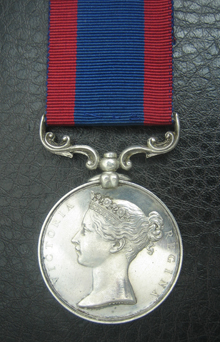 AN OUTSTANDING AND IMPORTANT SUTLEJ MEDAL AWARDED TO ONE OF THE MOST SENIOR COMMANDERS AT THE BATTLE OF FEROZESHUHUR AND GENERAL OFFICER COMMANDING THE CAVALRY DIVISION, DURING WHICH BATTLE HE WAS WOUNDED. FOR HIS SERVICES DURING THE SIKH WAR HE WAS CREATED COMPANION ORDER OF BATH (C.B.) 3 APRIL 1846. HE HAD PREVIOUSLY SEEN SERVICE IN THE THIRD MAHRATTA WAR AND THE GWALIOR CAMPAIGN 1843, INCLUDING THE BATTLE OF PUNNIAR WHEN SERVED AS BRIGADIER IN COMMAND OF THE CAVALRY; MENTIONED IN DISPATCHES FOR BOTH CAMPAIGNS

Companion of the Most Honourable Military Order of the Bath (C.B.) London Gazette 3 April 1846. For services in Sikh War.

Served in Third Mahratta War 1817-18, Gwalior campaign 1843, including the battle of Punniar when served as Brigadier in command of the Cavalry; Mentioned in Dispatches, First Sikh War (Sutlej) 1845-6, appointed General Officer Commanding Cavalry, 13 December 1845 and as Commandant, commanded the three Brigades of Cavalry at the battle of Ferozeshuhur. He was wounded during the battle and it is not clear if he was invalided or not. He was appointed to command of 4th Brigade on 1 January 1846, Major General Thackwell taking over as General Officer Commanding Cavalry Division. For services during the Sikh War Mentioned in Dispatches, advance to Colonel on 30 January 1846 and created Companion Order of Bath (C.B.) 3 April 1846.

Memorial at Christ Church, Cheltenham; "Sacred to the memory of Col. David Harriot CB of the Bengal Light Cavalry, who departed this life at Cheltenham, on the 6th of Sept 1851, aged 63. He served in India for the long period of upwards of forty five years and was engaged in the Mahratta campaigns of 1817 and 18, in the battle of Punniar in 1843, and in the actions of the Sutlej in 1845 & 46. The Companionship of the most Hon. Order of the Bath, and two medals, attested the estimation in which his merits were held by the government he had so long and faithfully served. His remains are deposited in a vault at Swindon in this county."

As Brigadier in command of the Cavalry Brigade at the battle of Punniar and as General Officer Commanding Cavalry at the battle of Ferozeshuhur, Lt Colonel Harriot would not have served with his own Regiment during either of these battles but would have been on the Brigade Staff at the former and Divisional Staff at the latter. As he would not have been with his Regiment or Brigade, his exact movements during the battle of Ferozeshuhur and when and where exactly he was wounded, need further research.

Condition GVF. A very fine and rare Divisional Commanders medal for the Sutlej campaign, let alone one who was wounded at arguably one the hardest fought battle during the British Wars in India. Sold with research, including a selection of period publications and Sikh War dispatches, on the CD