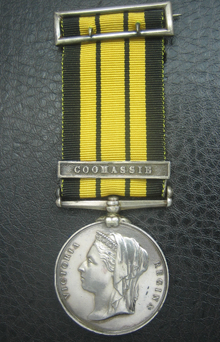 A VERY SCARCE 42ND ROYAL HIGHLANDERS (BLACK WATCH) ASHANTEE 1873 TO A CAPTAIN AND COMPANY COMMANDER WHO WAS WOUNDED AT THE BATTLE OF ORDAHSU ON 4 FEBRUARY 1874, THE FINAL BATTLE OF THE CAMPAIGN THAT OPENED THE DOORWAY TO THE COOMASSIE ITSELF

Major Thomas George Carus Moore was born on 5 August 1838 at Middleton, Cumbria. After attending the Royal Military College he was Commissioned Ensign the 42nd Royal Highlanders (the Black Watch) on 12 December 1856. Promoted to Lieutenant on 29 July 1861 and Captain, 12 November 1872, shortly after which, in December 1873, he left for the Gold Coast with his Regiment to take part in Sir Garnet Wolseley's Ashantee Campaign (1873-4). Of only short duration, the Campaign was extremely hard fought, in fearful conditions. With disease a constant factor, logistics were also a huge problem, not only due to the conditions but because local porters, who were rightly fearful of the Ashanti and were deserting in large numbers. To add to this, much of the fighting took place at very close quarters in the jungle, in which visibility was often no more than a few yards.

The 42nd Highlanders arrived off the coast of West Africa on 22 Jan 1874 and marched inland. After 30 miles the native porters deserted and Captain Moore (much to Wolseleys anger) is mentioned as having volunteered with his Company of the Black Watch for the grueling task of carrying stores of boxes (of 50 pounds in weight) on their shoulders from the Central Depot in Mansu over the next 11 miles to Suta in order to continue inland towards Coomassie. On 26 January the advanced guard under Colonel McLeod took Borborassie, and on the 30 January they reached Quarman, not far from the Ashanti camp at Amoaful.

The approach towards the enemy was made in the form of a square so that the 42nd and some detachments formed the front face, under Major Macpherson. A few hundred yards beyond Eginkassi they were fired on by tribesmen hidden in the trees. They were in a dangerous position, exposed to an enemy that could not be seen, and casualties mounted up. Artillery was brought up and this helped to disperse the Ashantees, and the Black Watch pursued them, to the sound of the pipes, to their camp. Major Baird was mortally wounded. Seven officers, including Major Macpherson and Captain Creagh and 104 men of the 42nd were wounded, far higher casualties than any other Regiment. Lance Sergeant McCaw, one of the wounded, won the VC for continuing to lead his section despite his injury.

On the 4 February they fought the enemy at the Battle of Ordahsu, and after six hours hard fighting the British forces won the day, with the enemy fleeing to Coomassie. During this battle, Captain Moore, Lieutenants Grogan and Wauchope of the 42nd were wounded, as were 14 other ranks. Lieutenant Bell of the Royal Engineers, won the Victoria Cross for his fearless and resolute bearing, being always at the front.

After the battle, British troops entered Coomassie after this battle to find the Ashanti king had fled. Having accomplished their task the army marched back to the coast and were embarked on 27 Feb. The 42nd were in Portsmouth by 23 March. The commanding officer Lieutenant-Colonel McLeod was made KCB and medals given out to selected NCOs and men for distinguished conduct in the field, and for meritorious services, as well as campaign medals for all ranks. They were granted the battle honour ASHANTEE 1873- 4 which was given to only four units; the Black Watch, the Welsh Fusiliers, the Rifle Brigade and the West India Regiment.

Captain Moore retired with the honorary rank of Major on 5 October 1878, and died later on 3 April 1903 at North Berwick, East Lothian, being buried at Valley Cemetery, Stirling.

Condition GVF, minor EK’s, with ribbon broach. Medals to 42nd Officers are scarce enough as it’s a very well collected Regiment and large number of 42nd medals are held in the Regimental museum. However Officer casualty medals are rarely seen on the market.