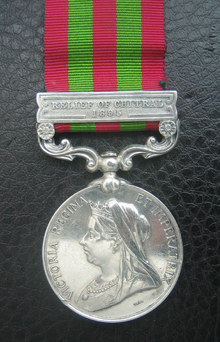 Henry William Fletcher was commissioned Second Lieutenant in the East Lancashire Regiment and served with the 1st Battalion in India as part of the Chitral Relief Force under Sir Robert Low. He was promoted Lieutenant on 19 November 1897, and subsequently served on attachment with the 4th (Uganda) Battalion, King’s African Rifles, with the rank of Captain (also entitled to an Africa General Service Medal with clasp Somaliland 1902-04).