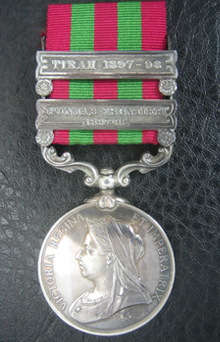 INDIA GENERAL SERVICE 1895 TO A PRIVATE OF THE 1ST BATTALION DORSET REGIMENT WHO DIED OF WOUNDS DURING THE TIRAH CAMPAIGN, NOVEMBER 1897

W. Drury attested for the Dorset Regiment, and served with the 1st Battalion as part of the Tirah Expeditionary Force on the North West Frontier of India. He was dangerously wounded by gunshot to the stomach and abdomen whilst on foraging duty near Maidan Camp on 7 November 1897, and subsequently died of his wounds.

Condition EF .Sold with two letters confirming his being wounded.