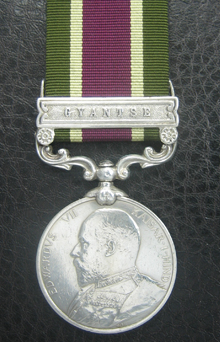 Henry Prentice, an 18 year old Greengrocers assistant from Lambeth, London, enlisted into the Royal Fusiliers on 12 March 1900. Noting 3 years service with the 3rd Royal West Surrey Regiment (militia), he served in South Africa with the 4th battalions Mounted Infantry Company (20th M.I.) from 16 March 1901 until 21 October 1902 (medal and 5 clasps). Promoted Lance Corporal on 19 February 1903, he further served with the 1st Battalion Royal Fusiliers during the Tibet expedition 1904, during which he was wounded in action during the assault on the fortress at Gyantse Yong 6 July 1904.

Reverting to Private on 10 August 1905, he was awarded a gratuity of £1.12 for service with the Tibet Mission escort and transferred to the Army Reserve on 11 March 1908. Prentice’s service papers note him having passed the Mounted Infantry course on 16 March 1901 and Mounted Infantry (maxim gun) course on 1 January 1907. Confirms service during the Boer War 1901-02 and on the Sikkim-Tibet Expedition 1904, present at the action of Niani (28 June 1904), operations at and around Gyantse and the march to Lhassa.

Also confirms he was wounded in the scalp at Gyantse Yong 6 July 1904.

423 Tibet medals and clasp issued to British Officers and men, all but a handful being to 1st Royal Fusiliers who were the only British Regiment to take part in the expedition.

During the Tibet Expedition, the bulk of the casualties( 202) were to Native units. Several British Officers were killed and wounded but no British NCO’s or men were killed. However 3 were wounded; all 3, including Prentice, at the Gyantse Yong 6 July 1904. A further 8 were injured in the explosion at Gyantse on 7 July 1904.

A superb Royal Fusiliers Tibet roll on the Regimental Museum website, with details of the campaign can be found here:
https://www.fusiliermuseumlondon.org/download?id=12393