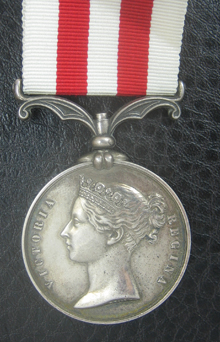 Henry Shaw Jones was born at Naples on 1 August 1836. He was appointed Ensign in the 84th Regiment on 25 August 1857, by purchase, and promoted to Lieutenant on 24 August 1858, without purchase. He served in the Shahabad District under Brigadier Douglas C.B. until the suppression of the rebellion, and was severely wounded in the left thigh by a musket ball at Barrahapore on 14 October 1858.

‘My force has not had much fighting this time and I have only been once under fire at a village called Chougein. We had one or two men wounded and one killed, the sepoys lost about sixty. The Headquarters have had harder work, and in one fight we (the 84th) lost three men killed, one officer (Jones) and five men wounded. Jones was severely wounded be a ball through the fleshy part of his thigh; the last accounts of him say he’s getting on as well as can be expected, but the ball has not been taken out.’

‘Jones’ wound is getting on nicely, though the bullet is still in his leg; he is now able to walk a little with a stick’. (The Indian Mutiny Letters of Colonel H. P. Pearson, 84th Regiment, refer).

Condition GVF. Sold with copy service papers and other research.