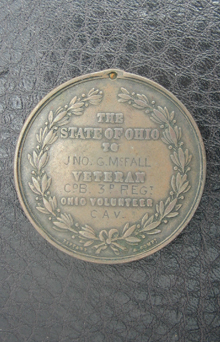 John G McFall Enlisted in Company B ( Comp B known as "Erie Rangers" ), Ohio 3rd Cavalry Regiment on 04 Sep 1861. Mustered out on 04 Aug 1865 at Edgefield, TN. He served right through the operational service of this Regiment, details of which are as follows:

3rd Ohio Cavalry was organized in September 1861 by future Civil War general Lewis Zahm. In April 1862, it moved with General Don Carlos Buell through Tennessee. During that summer, the 3rd Ohio Cavalry participated in the Siege of Corinth. It later fought at the Battle of Chickamauga. In January 1864, the regiment was re-formed as its three year term had expired. The unit later participated in raids with Stoneman and Wilson before it was discharged on August 14, 1865.

Regiment. lost during service 1 Officer and 58 Enlisted men killed and mortally wounded and 6 Officers and 229 Enlisted men by disease. Total 294.

Medal is disc only and has wear to detail from polishing. This done some time ago as the medal retains a fine patina. Nice to have a medal to a man who had long service and would have mustered out as a veteran.

Sold with research and book on the Regiments civil war service on CD.