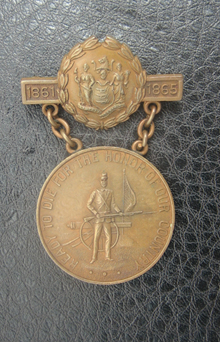 John L Severns was born in Westfield, New Jersey circa 1841. On 12 August 1862 he enlisted into Company ‘G’ of the newly raised 12th New Jersey infantry Regiment. The Regiment took part in the battle of Chancellorville, 1-5 May 1863, where the Regiment was heavily engaged, loosing 179 Officers and Men , killed, wounded and missing. He was present with the regiment until July 2, 1863, when he was wounded and captured at Gettysburg. Company G charged and recaptured the Bliss barn on July 2. While fighting at the barn;
“a cannonball struck an overhead beam which broke and fell upon Severns, crushing his right shoulder, breaking the collar bone and injuring both breasts internally, pinning him to the floor where he remained until released by the enemy and taken prisoner.”

THE 15TH NEW JERSEY AT THE BATTLE OF GETTYSBURG

From the monument north of the Angle:
‘In memory of the men of the Twelfth Regiment New Jersey Infantry Volunteers who upon this field July 2 & 3, 1863, and who elsewhere died under the flag this monument is dedicated by their surviving comrades as an example to future generations.

From the marker by the Bliss farm:
‘Erected by the State of New Jersey, 1888, in honor of the 12th Regiment of volunteers, a detachment of which in the afternoon of July 2nd, 1863, charged the Bliss house and barn here capturing the enemy’s skirmish reserve of 7 officers and 85 men stationed therein. On the morning of July 3, another detachment of the regiment charged, capturing the buildings, one officer and one man, and driving back the skirmish reserve. The regiment lost in their charges 60 officers and men.’

Severns was paroled by the retreating Confederates and eventually transferred to the Veteran Reserve Corps on March 31, 1864. He mustered out of service on June 30, 1865. He died on 12 June 1913 and is buried in Evergreen Cemetery , Camden, New Jersey.

The medal is sold with a comprehensive file of research, including musters and military pension, which gives testimonies on his service and in particular, by Officers and men who witnessed his wounding and capture at Bliss Barn.

Condition EF, medal number 3370 confirmed as issued to recipient. A superb and scarce on the market and very desirable battle of Gettysburg casualty medal.