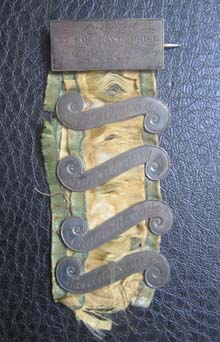 A SUPERB REGIMENTAL BADGE AWARDED TO THE LT COLONEL OF THE 7TH NEW JERSEY INFANTRY REGIMENT WHO WAS WOUNDED RALLYING HIS MEN TO THE COLOURS AT THE BATTLE OF GETTYSBURG, LEADING THE REGIMENT UNTIL THE FINAL SURRENDER AT APPOMATTOX AND BEING AWARDED A BREVET OF BRIGADIER GENERAL

Brevet Brigadier General Francis Price Jr was born in 1839. The son of former New Jersey Governor Rodman Price (who opposed the Civil War, and was briefly jailed for sedition), he enlisted in the 2nd New Jersey Militia only days after the outbreak of the War, becoming a Corporal in Company B. He served in the unit from its muster in on May 1, 1861 to its muster out in July 1861 (the unit serving in reserve during the First Battle of Bull Run).

When the call went out for three-year enlistment regiments, he joined the 7th New Jersey Volunteer Infantry, receiving a commission of 1st Lieutenant and Regimental Adjutant on September 2, 1861. Heavily involved in the training of the men of his regiment, he served in this capacity until March 1862, when at age 22 he was promoted to Major to replaced the resigned Major J. Dallas McIntosh. After a severe bout with dysentery, he joined his regiment in the Spring 1862 Peninsular Campaign, and fought with it in the May 5 Battle of Williamsburg. Towards the end of that battle Price assumed command of the regiment when commander Lieutenant Colonel Ezra Carman left the field with an arm wound. During this battle the regiment suffered grievous casualties of 123 in killed and wounded. Price headed his unit throughout the month, despite being severely sick at times, and directed their actions during the Battle of Fair Oaks.

When the 7th New Jersey's Colonel, Joseph W Revere, returned from a month long sick leave, Francis Price was sent home to properly recover from his illness. While home convalescing, he applied for, and was granted, a discharge from the Army due to medical infirmary in July 1862. However, the need for experienced field officers caused his discharged to be unexpectedly revoked in November. Ordered back to the field, he did not return to the 7th New Jersey in time, and spent a few days under arrest upon his arrival. When he was released from arrest, he was promoted to Lieutenant Colonel on December 9, 1862 (Colonel Revere had been promoted to Brigadier General by then, and the regiment's commander was now Colonel Louis R Francine).

In the May 1863 Battle of Chancellorsville Price once again assumed command of the regiment when during the battle, Colonel Francine was ordered to the rear by the regiment doctor. Price led the regiment, which numbered under 300 men, throughout the rest of the battle, leading at least one bayonet charge and reformed the regiment when the rebels advanced. The 7th lost 6 killed, 43 wounded and 4 missing.. The regiment captured 5 rebel battle flags and 350 prisoners.

Ill again with sickness, Price remained with the regiment after the return of Colonel Francine prior to the Battle of Gettysburg. In that July 1863 engagement, Price was with the regiment, now not much more than 275 strong and desperately short on officers. It was positioned on the north side of the Wheatfield, near Emmittsburg Road supporting federal artillery on the second day of the Battle. When the forces of Confederate General James B. Longstreet launched a massive attack on the out positioned Union forces and the Union troops fell back in disorder. In the face of a murderous fire, the New Jersey troops held their position for a time, taking heavy casualties, including Colonel Francine. The 7th’ resolve rapidly disintegrated as did order in the regiment. Colonel Price attempted to stem the retreat of his men in the face of overwhelming odds by grabbing the regiment's colour bearers and planting the flags where his men could see them. Soon after performing that act he was severely wounded in the leg, and was carried off the field. By the end of the battle the Regiment had suffered 114 casualties, including 10 of the 14 Officers present. This amounted to a casualty rate of near 42% for the regiment!

The combination of his illness and wounding would keep Price out of action for over a year (although on July 26, 1863, while convalescing, he was promoted to Colonel to replace Louis Francine, who was mortally wounded at Gettysburg). He would lead his troops in the Battles of Ream's Station and Boydton Plank Road, and in November 1864 he presided over the expansion of his unit (now designated the 7th New Jersey Veteran Infantry) as the remnants of the 5th New Jersey Volunteer Infantry were folded into it, even then the combined Regiments numbered barely 350 officers and men. He led his command through the end of the Siege of Petersburg, and to the final surrender at Appomattox in April 1865. On March 13, 1865 he was brevetted Brigadier General, US Volunteers for "gallant and meritorious services during the war". In the Grand Review of the Army in May 1865, he marched at the head of his men, some of which had served and survived the full 4 years of the war. Mustered out on July 17, 1865, upon his return home he made a successful career as a lawyer and farmer, and passed away in Oakland, New Jersey on 14th February 1898. (most of the above taken from a bio by Russ Dodge).

The badge itself which measure 8.3 x 3.3cm and is pinned to the tunic by a Silver plaque with the following inscription:
‘Presented to LT COL FRANK PRICE by the Officers of the 7th Regt NJV May 8th 1863’

The plaque is attached to a ribbon, with four silver clasps, each with a battle honour engraved on it; Siege of Yorktown, Fredericksburg, Chancellorsville and Williamsburg.

The plaque and clasps show a very pleasing age toning but the ribbon, is very fragile, though still complete and the pin is undamaged. A photo of Colonel Price shows him wearing this exact badge, with the same number of clasps. However it also shows some kind of disc was originally attached to the bottom of the ribbon. What this was and if it was any design or such on it is unknown. However in the book ‘Give it to them Jersey Blues’ which is a history of the regiment., of particular note are a number of Officers wearing the very same badge some with less clasps and all with the same disc at the bottom. I have found no information on the badge or other examples except in the book, so the reason Price and some other Officers were given these badges is unclear. However all pictured with the badge were serving with the regiment in mid 1863 when Price’s badge was given to him and the date 8th May 1863 is shortly after the battle of Chancellorsville for which Price has a clasp. Chancellorsville was an important battle as far as the regiment was concerned, so its possible it was awarded to officers for their achievement on that day and other battle honours were added to those men ribbons that had served at the other more important battles the regiment had taken a full part in. The fact that there is no clasp for Gettysburg would suggest the badges were awarded at one time only.

Badge comes complete with Prices Musters, reports etc and pension files from the National Archives, various copied research and a copy of ‘Give it to them Jersey Blues’ which is a history of the regiment. This book contains musters for the regiment and a very large number of photos of members of the regiment.

A superb little badge to a gallant Colonel of a New Jersey regiment that saw a great deal of action and a great many casualties throughout the Civil War. Made better still that there is a photo of the Colonel wearing the badge.